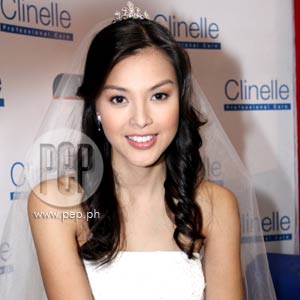 "It's still something like a culture shock, so I'm not used to it yet," Malaysian actress Carmen Soo said about the fame she's getting in the Philippines.

Malaysian actress Carmen Soo made a short visit to the Philippines for the launch of her newest product endorsement, Clinelle, held last Saturday, February 6, at The Block in SM North EDSA, Quezon City.

After hosting the dating game prepared by Clinelle, Carmen attended to the autograph signing for her fans. Until now, she is amazed that many Filipinos still recognize her despite her long absence from Philippine television. Her last show was the teleserye Kahit Isang Saglit (2008), in which she was paired with Jericho Rosales.

"Honestly, I haven't quite gotten used to it," she told PEP (Philippine Entertainment Portal) about the attention she's been getting from her Pinoy fans.

She related how celebrity life in the Philippines is different from Malaysia.

"I don't know if you know in Malaysia, it's quite different," Carmen said. "I'm free in Malaysia, everyone is more relaxed. Here, they're very passionate about the shows being shown and the actors themselves.

"It's kinda weird being in a foreign country and being recognized and they wanna take photos and there are a lot of fans. They are really, really showing undying support. I'm really thankful."

BUSY MEETING HER PINOY FRIENDS. During her short trip to the country, the media asked Carmen if she had time to meet Jericho.

"Yesterday [Feb. 5], I saw him because we had a fans day for [Kahit Isang Saglit], a fun day out with the fans. He's great and really, really busy promoting his album and he's doing very well," she said.

Carmen added that she didn't have enough time to meet her local friends for long because she had to go back to Malaysia the day after the event.

"Every time I come, I call everyone I know in the Philippines, meeting all my friends. I feel so busy—breakfast, lunch, merienda, and even dinner—meeting everyone," she explained.

As of now, Carmen couldn't say anything about her next project in the country. She just told the media, "ABS-CBN has a project lined up for me. But I think I'm not in liberty to say a detail yet. I think I can only say that it will be very, very soon."

She revealed, "I'm spending more time in the Philippines this year."

VALENTINE'S DAY. Carmen said that her Valentine's this year won't be lonely, even though she does not have a special someone right now.

Carmen said that she has yet to find the right guy. PEP asked her about the qualities she's looking for in a man.

"The list goes very long," she replied. "Someone with integrity, with principle, someone who's loyal to me. I think people who are faithful with one another is very, very, important nowadays. Someone who speaks for himself very well, and someone who truly loves and cherishes me. Someone passionate in life and allows me to do the same to him. Some people don't open themselves up to me, sometimes it's like that. The list is very long."