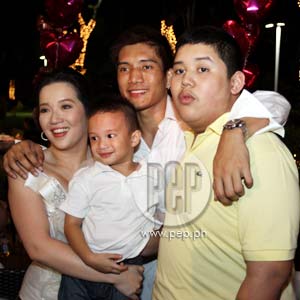 At 28, James Yap's wish is to keep his family together, no matter what. Kris Aquino, on the other hand, prays for good health. After blowing out their birthday candles, Joshua (right) and baby James joined their parents for this photo op.

She's been through a lot lately, but Kris Aquino is smiling and glowing as she turns another year older on February 14, which happens to be Valentine's Day and also Chinese New Year, at the Felix restaurant in Greenbelt 5, Makati City.

Unlike most celebrators who prefer making a grand entrance, the famous host-actress chooses to arrive at the venue even before her guests begin to pour in. A few minutes prior to the indicated time in her invite, she's almost done eating; and at around 10:20 p.m., she's more than ready to greet her guests with a wide smile and an oh-so-bubbly hello!

Among the early birds are her sisters—Pinky, Ballsy, and Viel—who all turn scarlet at the mention of their appearance in The Buzz, where they sang Steve Curtis Chapman's "I Will Be Here" for Kris, that afternoon.

Her husband, cager James Yap, who's also celebrating his 28th birthday, shows up at about 10:45 p.m. Most of his teammates in Purefoods Tender Juicy Giants—Kerby Raymundo, Peter June Simon, Paul Artadi, Rico Maierhofer, Roger Yap, Nino Canaleta, among others—head to the venue after their ball game. Marc Pingris and Don Allado arrive with their respective wives, Danica Sotto and Maricar de Mesa.

Kris is the star of the night, of course. However, some guests unwittingly compete in capturing the small crowd's attention.

There's the gorgeous Gretchen Barretto, who arrives with her partner Tonyboy Cojuangco. Now what's the latest buzz about her? She says she's one lucky lady that day because the gift she received from the billionaire business tycoon was a "brand-new sports car."

And, of course, there's 14-year-old Joshua and his bear hugs, and two-year-old baby James with his very charming smile.

BIRTHDAY WISHES. Well-wishers want the couple to have "happiness" and "good life."

Turning a bit more positive, she continues, "Whatever years remain in my life will really be healthy and productive."

For his part, James's constant prayer also has to do with his health and Kris's.

Before finishing the interview, he adds expressively, 'Tsaka, gusto ko lang mag-thank you...."

It's past 1:00 a.m. when Kris finally finds the time to sit comfortably and relax with her kids. She had The Buzz that day, she spent the entire evening standing (in her high-heels), talking, and smiling for the camera—but not an trace of tiredness on her face.

Yeah, she's been through a lot lately, but Kris Aquino has so much to be grateful for and a lot to look forward to in this Year of the Tiger.