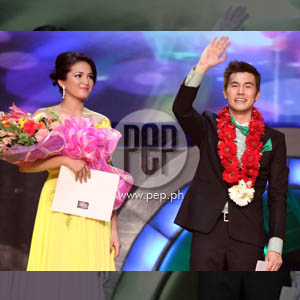 They dreamed, they believed, and they survived.

Placing second to Steven was Enzo Pineda who was named First Prince while Rocco Nacino came in third to bag the Second Prince title.

Steven and Sarah got the highest combined text and online votes from the viewers and scores from the StarStruck Council, composed of Lolit Solis, Iza Calzado, and Floy Quintos.

Steven and Sarah each won P1.5 million cash prize and an exclusive contract with GMA Network, with a minimum guarantee of P3.5 million.

Enzo, Rocco, and Diva, on the other hand, will each receive P200,000 cash prize and exclusive contracts with the Kapuso Network.

The rest of the Avengers were also given GMA contracts.

Steven struggled in the early part of the competition, often criticized for his lack of energy and his difficulty in speaking Tagalog. But it turned out that the strength of this Filipino-Chinese-Portuguese, aside from his singing voice, was his fan base. In fact, when the accumulated viewers' votes of the six remaining finalists in the first nine weeks were revealed, Steven's votes were way higher than any survivor. This somehow cushioned his campaign in the competition and eventually sealed his victory.

THE FINAL JUDGEMENT. The Final Judgment of StarStruck V served as a reunion of the past winners, survivors, and hosts as well.

Joining Raymond Gutierrez, Carla Abellana, and Dennis Trillo as hosts in this year's Final Judgment were past StarStruck hosts Dingdong Dantes (Seasons 1 to 4) and Nancy Castiglione (Season 1). Only Jolina Magdangal, who became a host from Season 2 to 4, was not present due to a prior commitment.

Also, StarStruck returned to the Big Dome after two seasons. The Final Judgment of Seasons 1 and 2 were held at the Araneta Coliseum before moving to the Marikina Sports Complex in Seasons 3 and 4.

Fans of the Final 5 filled the Big Dome to the rafters wearing the colors of their bets: green for Steven, yellow for Sarah, orange for Diva, blue for Enzo, and purple for Rocco. Every time the Final 5 appeared or were mentioned, the fans cheered and screamed so loudly for their bets that people could hardly hear each other.

The past and present StarStruck hosts opened the show in a spectacular number with the past winners and survivors, and this season's Final 5 and Avengers.

After this, the Final 5 showcased their individual talents. Enzo, Diva, Steven, and Rocco all did song-and-dance numbers but Sarah alone sang live. Enzo was the first to perform with an energetic medley of Jay Sean's "Down" and "Do You Remember." He was followed by Diva who did a sexy medley of Lady Gaga's "Bad Romance" and Alexandra Burke's "Bad Boys." Steven showed he got the moves with Iyaz's "Replay" and David Guetta's "Sexy Chick." Sarah displayed her vocal prowess by singing Jordin Sparks's "This Is My Now" and Miley Cyrus's "The Climb." Rocco was the last to perform with a teasing medley of songs from American Idol Season 8's Kris Allen ("Live Like We're Dying") and Adam Lambert ("For Your Entertainment").

After each performance, the StarStruck Council members were given the chance to comment.

Iza said that Enzo is "an adorable performer" and that he has "enough discipline and very determined" to win the competition. Floy said that Diva is "one of the most talented" among the contenders and she is "willing to listen and learn." Manay Lolit observed that Steven's performance was his best and that he is the "most charming" among the survivors. Iza called Sarah "beautiful, classy, and talented" and assured her that she will make it in this business. Lastly, Direk Floy complimented Rocco for being "the hunkiest, most hardworking" among the survivors and believes that he "wants this more than any of them."

In the next production number, the Final 5 shared the stage with past StarStruck winners: Jennylyn Mercado and Mark Herras of Season 1; Mike Tan and Ryza Cenon of Season 2; and Aljur Abrenica, Kris Bernal, Mart Escudero, and Jewel Mische of Season 4. Only Jackie Rice of Season 3 was not able to attend; her male counterpart, Marky Cielo, passed away in December 2008.

The StarStruck V Avengers once again stepped on stage for a medley of sentimental songs with an accompanying music video on screen where they were joined by the Final 5.

The finale was the emotional farewell walk of the Final 5 with R&B royalty Jay-R and Kyla serenading them.