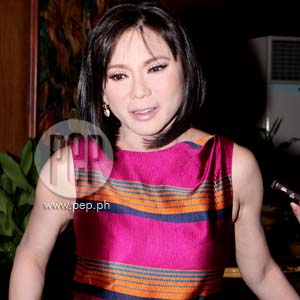 Vicki Belo admits that she is still smitten with ex-boyfriend Hayden Kho. The two former lovers were briefly reunited last February 23 during Hayden's arraignment at the Pasig Regional Trial Court.

Dra. Vicki Belo is back to square one after she failed to accomplish her set goal, which was to cut communication lines and avoid any possible interaction with ex-boyfriend Hayden Kho.

Only last month, January 15 to be exact, Vicki revealed her no-communication agreement with Hayden until May 20. The purpose of the deal was to enable both parties to heal and objectively sort out their feelings toward each other in light of the sex video scandal involving Kho.

Vicki at the time was also scheduled to join an out-of-town spiritual retreat. The Belo Medical Group founder dubbed the activity as a "soul searching" endeavor to help her recover from the growing strains of her personal and professional life.

FAILED ATTEMPT. The no-communication agreement between the ex-couple, however, ended earlier than expected as Vicki made a surprise appearance at Hayden's arraignment last February 23 at the Pasig Regional Trial Court in Pasig City.

Hayden was accused by sexy actress Katrina Halili of violating Republic Act 9262 (Anti-Violence Against Women and Children Act) for allegedly filming their intimate moments without her consent.

At the press conference held earlier this afternoon, February 24, at Annabel's restaurant on Tomas Morato, Quezon City to officially welcome the entry of Jennylyn Mercado and Valerie Concepcion to Belo's growing list of celebrity endorsers, Vicki explained that her presence at Kho's court appointment was only meant to boost her ex-boyfriend's low morale.

"The lawyers were telling me kawawa naman, he's feeling depressed kasi, di ba, his license got lost and he's down na so [the lawyers asked me], 'Baka you want to go show moral support?'Arraignment lang so I went lang to the court and then no more na. I was planning nga to just sit in the back and not even talk to him. Parang gusto ko lang tingnan. Pero nag-meet kami sa elevator, malas ang timing," said Vicki.

Although the popular cosmetic surgeon confessed feeling "disappointed" for failing to keep her promise, she felt that the entire effort was "worth it."

She added, "He was so happy to see me. I think it made him feel better na may moral support pa rin siya."

Vicki though was quick to deny nagging speculations that her presence at Hayden's arraignment meant they're back in each other's arms.

But signs do favor Hayden should he decide to pursue Vicki once more. When asked how she reacted on seeing her former boyfriend again after a long spell, Vicki replied, "When I saw him sabi ko 'Shucks, ang guwapo pa rin [niya]!'"