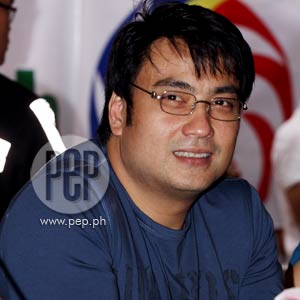 In 2005, Sen. Bong Revilla was not present at the closed-door caucus where 19 senators voted to proceed with the Senate probe on the Hello-Garci audio scandal, which accused President Gloria Macapagal-Arroyo of cheating in the 2004 presidential elections. Now he faces his own audio scandal.

An audio file circulating on the Internet, featuring a voice that sounds like Bong Revilla's, has dragged the senator into issues of election fraud in Cavite.

The reelectionist Revilla, in an interview with PEP (Philippine Entertainment Portal), has denied that the tape is authentic and suggested that it may have been engineered.

He told PEP associate editor Rommel Llanes, at a dinner for the Metro Manila Film Festival (MMFF) last night, February 26, that sound bites from old recordings of his voice may have been spliced together to make him sound like he was talking about plans to cheat in the coming May 10, 2010 elections.

The controversial audio file hit the Internet on Friday, February 19, when a certain MrGalingko posted a YouTube video containing a recording of a voice that sounds like Revilla's voice.

According to his user details, MrGalingko joined YouTube on February 19 (the day the video was uploaded), resides in the Philippines, and is 46 years old.

PEP tried to confirm the recording by sending an e-mail to MrGalingko through YouTube on February 25, the day we received information about the Internet audio. But as of press time, we have yet to receive a reply. As of this writing, YouTube records show that MrGalingko's last log-in date was at five in the morning, today, February 27.

Still, MrGalingko's replies to comments on his video upload imply that he is, in fact, the person who recorded the audio and that the recording is genuine.

The majority of the 151 existing comments (as of February 27, 11:26 a.m.) on MrGalingko's video say that they believe the recording is authentic. Only a few say that the video is a demolition job against Revilla.

A survey conducted in January by an independent group ranked Revilla as the leading senatorial candidate in the 2010 elections. The January 21 to 24 survey conducted by the Social Weather Stations showed Revilla garnering a 58 percent rating, beating 57 other candidates.

NOTE: Republic Act No. 4200, also known as the Anti-Wiretapping Law, forbids any person—which includes persons from media institutions, like PEP—from publishing the transcription of the 45-second recording. The law also restricts PEP from providing a link to the audio file in this article.

THE CONTEXT. In summary, the recording implies that the senator is involved in election fraud, is using police forces for electoral gain, and is enjoying Malacañang protection.

Two of Sen. Revilla's relatives are running for electoral posts in Bacoor this year: his brother Strike (real name: Edwin Mortel Bautista), who is the current mayor of Bacoor, is running for reelection. His wife Lani Mercado is running for congresswoman.

Mercado ran for mayor of Bacoor in 2001, but lost allegedly due to massive election cheating. She ran against then reelectionist Jessie Castillo. Incumbent mayor Strike Revilla is now running against Jessie Castillo.

According to PDI reporter Maricar Cinco, two police sources, who asked not to be named, said Revilla allegedly wanted Corpus replaced because of the latter's "close ties" with Cavite Governor Ireneo "Ayong" Maliksi, a known political rival of the Revillas.

But Strike Revilla and Lani Mercado told PDI they have no knowledge of Revilla's role in the shuffle.

Maliksi and Castillo were former partymates in Partido Magdalo, until the former moved to the Liberal Party last November. The Revillas, on the other hand, remain loyal to President Arroyo, who is president emeritus of Lakas-Kampi-CMD.

In her reply sent at 2:55 p.m. of the same day, Manzo said they would issue a statement after they got back from a motorcade in Batangas.

At 2:59 p.m., Robert Moraleda, a staffer in Revilla's campaign team, called PEP to say that the senator would first have to check the statement the staff was preparing before anything could be released to the media.

Moraleda also said that they checked the audio file on the Internet after listening to it on an FM radio show yesterday morning. The audio file was broadcast on DJ Mo Twister's radio show Good Times with Mo, which airs on Magic 89.9.

Moraleda then asked PEP to wait for Revilla's statement before doing an article about the recording. Their lawyers, he admitted, initially advised them not to comment on the audio file at all, because doing so may give media establishments "the license" to publish the recording.

Revilla's lawyers, he continued, were "making an inventory" of media establishments publishing the story. He said their lawyers would study whether the articles in these establishments merited legal action.

At 6:48 p.m. of February 25, PEP—in the interest of fair reporting—again sent Moraleda a text message asking about the status of the Revilla statement. Moraleda replied that Revilla was still in Batangas, and that they could not complete the statement until he arrived.

At 9:52 a.m. of the next day, February 26, PEP again inquired about the statement through another text message to Moraleda. He replied that Revilla and his staff would have a lunch meeting about the issue.

At 6:05 p.m. of Feb. 26, PEP called Moraleda to inquire about the results of the lunch meeting. In a phone call, Moraleda now answered that PEP should ask Revilla directly about it at the Metro Manila Film Festival (MMFF) dinner that night.

REVILLA'S STATEMENT. At the MMFF dinner, PEP approached Revilla. The senator denied that he said the words heard on MrGalingko's recording exactly as they were spoken.

The actor-turned-politician also said he believes that the recording was posted on the Internet to derail his candidacy.

Revilla added that the damaging recording does not affect him.

However, the senator revealed that he has already tapped the National Bureau of Investigation (NBI) to trace the source of the audio file.

Revilla concluded by saying that he believes issues such as this will continue coming out until the May election ends.