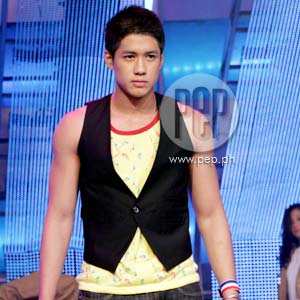 Aljur Abrenica will have a lot to thank for this Holy Week. The hunky actor plans to spend the solemn occasion with his family but he declined to mention where.

Though nothing's definite yet at this juncture, the hunky actor told PEP (Philippine Entertainment Portal) and other members of the entertainment press that a repeat of the show is highly probable.

Aljur made this revelation during the launching of Party Pilipinas last March 28 at Studio 7 of the GMA Network Studios in Quezon City. The 20-year-old Last Prince star engaged fellow StarStruck mates Mark Herras and neophyte Rocco Nacino in a dance showdown during last Sunday's affair.

The success of I'm Yours and the good showing of Last Prince are only two of the many blessings worth thanking for, according to Aljur as he looks forward to the long Holy Week break.

Like most of our local celebrities, Aljur sees Holy Week as the right time to slow down a bit from work and reflect on his personal and professional life.

Aljur opted not to reveal much concerning his chosen destination for the Holy Week. He frankly admitted though that he won't be spending the holidays with love team partner, Kris Bernal.

Apparently, Aljur continues to be haunted by an incident during his Holy Week vacation last year in Puerto Galera.

What was supposed to be an enjoyable time became a legal nightmare for the actor after a 15-year-old acquaintance named Michelle Saludo accused him of taking advantage of her during their brief stay in the picturesque beach resort of Oriental Mindoro.

The acts of lasciviousness complaint charged against Aljur by Saludo on June 3, 2009 was dismissed by the Dept. of Justice (DOJ) recently for "lack of probable cause."

There are important lessons learned from the incident, mentioned Aljur, who maintained his innocence from the start. With Holy Week already upon us, the junking of the case will surely find its way to Aljur's growing thank-you list.