Joross Gamboa not yet over ex-girlfriend Roxanne Guinoo? 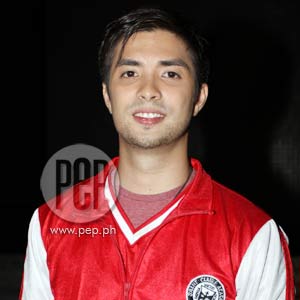 Joross Gamboa's transfer to GMA-7 has given him opportunities to star alongside Kapuso beauties like Ynna Assistio and be able to mingle with FHM hottie Jackie Rice. With rumors linking him to them, he can not avoid the fact that their unanswered questions whether he has already moved on from his old relationship with ex-girlfriend Roxanne Guinoo and his feelings about Roxanne's status right now as a soon-to-be-wife and mother.

Well, it was more than just an interview, rather an interrogation—albeit playful—with host John "Sweet" Lapus handling the reigns and Joross safely strapped to a lie-detector machine. An assurance of "tatlong tanong lang, Joross" from Sweet made a calming effect on Joross, who earlier looked stiff with all the wires attached to him

The three questions from Sweet had to do of course with three of the juiciest issues linked to Joross right now. The first question Sweet asked was, "Bulung-bulungan na sweet daw kayo [Jackie] sa isa't isa on and off camera. Crush mo ba si Jackie Rice?"

After thinking a moment, Joross smiled and gave a "Yes." The machine agreed with him: Truth. When asked what made him have a crush on Jackie, he answered, "Si Jackie kasi mabait siya and then professional katrabaho and down-to-earth. Ayaw niya 'yong pinapayungan siya, kasi kaya naman niya. So iyong ganoon traits, e, nakakatuwa."

Joross and Jackie are paired together in the upcoming Dear Friend episode, "Tisay."

Content with Joross's answer, Sweet moved on to the next question. Once again, it was related to a Kapuso beauty, this time Ynna Assistio, his co-star in an episode of SRO Cinemaserye Presents. "Sa palagay mo ba," asked Sweet, "nakaramdam ka ba na nagselos sa iyo si Mark Herras?"

When asked if he has any information on Mark and Ynna's relationship (they're rumored to be sweethearts!) he said, "Sa akin, wala ako sa lugar para sabihin iyon, e, pero parang sweet sila."

NOT YET OVER ROXANNE? The last question for Joross was the clincher. With one Lie and one Truth, the last question would decide if he'd walk out of SC with his head held high and proudly announce that he conquered the lie detector.

Again, it was a question related to a woman linked to Joross—his ex-girlfriend Roxanne Guinoo.

"No," answered Joross with a smile on his face.

Joross could only exclaim, "Oy!" and whatever objection he had had to wait as Sweet danced to the beat.

When asked if he has a girlfriend right now, he admitted, "Yes. Nagbakasyon kami sa Phuket, Thailand. She's a model and a student."