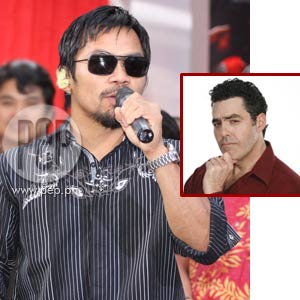 "Here's how you know your country doesn't have a lot going for—when everything is about Manny Pacquiao. Get a [expletive] life as a country," says Adam Carolla (inset) about the Philippines.

Carolla, who hosts The Adam Carolla Podcast in America, started his negative comments about the Pinoy boxing champ when a caller brought up the drug-testing issue that called off Pacquiao's supposed fight against American boxer Floyd Mayweather Jr.

Carolla dissed the WBO Welterweight champion for not agreeing to the Olympic-style drug procedure. According to an ESPN report, Mayweather proposed this test in compliance with the United States Anti-Doping Agency, which handles testing for Olympians, "to ensure fair play and sportsmanship by both fighters.

Carolla commented, "He [Pacquiao] says, he doesn't give blood the month of the fight, before the fight, because somehow it's gotta weaken him. And I'm gonna tell you, if that's a white fighter, and probably even a black fighter, if the black fighter was from Atlanta or somewhere like that, someone would go, 'What the [expletive] are you talking about? Give your drop of blood. It's not gonna make a difference, you know.'"

Then Carolla described Pacquiao as someone who "is praying to chicken bones."

He also said that the Pinoy boxer does not deserve to be respected and admired by his fellow Filipinos because, "He is a [expletive] idiot, of course. Give your stupid blood. If you're not juicing... If he's not actually juiced, then give them a [expletive] thimble of blood that they need to test so they can clear you from this fight."

Carolla also said, "Here's how you know your country doesn't have a lot going for—when everything is about Manny Pacquiao. Get a [expletive] life as a country.

"All you [expletive] got is this illiterate guy who won't give any blood, who happens to smash other guys in the head better than other people. That's all you have in the Philippines?"

ON RUNNING FOR PUBLIC OFFICE. The American radio and TV personality also hit Pacquiao about his decision to run for congress in the May 2010 elections.

"Really? You want some guy with brain damage running your country? Why don't you get your [expletive] together? They got [Pacquiao] and sex tours. That's all they have over there. Get your [expletives] together, Philippines."

Carolla pointed out in the end, "It's fine to be proud of your countrymen. But that's it? That's all you got?"

SICK MINORITY. As expected, Carolla's statements against Pacquiao and the Philippines caused a furor among the Filipinos. Different networking blogs were flooded with angry entries lambasting Carolla for his irresponsible remarks, some even demanding an apology from him.

The Philippine government, through Deputy Presidential Spokesman Gary Olivar, has issued a short statement on this matter.

Olivar said: “Hindi na nga kailangan pang hingan ng apology ng Pilipinas si Carolla because he is a sick minority. His statements do not carry any weight to any place in any country. He is a minority that deserves to be ignored.”

That's what Pacman is doing. He ignores Carolla who, the Filipino boxer says, is only trying to get attention.