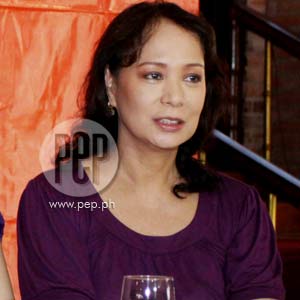 Gloria Diaz reveals she will vote for Sen. Manny Villar this coming election. "Yes, I will go for Villar. I just think that if he could make his business a success, he could also make our country a success," she said.

Former Miss Universe Gloria Diaz thinks all is not over for Maria Venus Raj, the winner of this year's Bb. Pilipinas-Universe crown who was dethroned recently due to a faulty birth certificate. (CLICK HERE to read related story.)

Dethronement may just be the opportunity that Maria Venus needs, says the actress and former beauty queen.

"Maybe this has given her more air time, more exposure. Maybe it's a blessing in a certain way," Gloria told PEP (Philippine Entertainment Portal) in an interview during the press conference for senatorial candidate Gilbert Remulla yesterday, April 6, at Annabel's Restaurant in Quezon City.

Bb. Pilipinas Charities, Inc. (BPCI) had decided to take back the Bb. Pilipinas-Universe crown from Maria Venus Raj because of inconsistencies in the details of her birth record. She only won the title last March 6, 2010, and she is still very much determined to fight for the title. (CLICK HERE to read related story)

Gloria said that the possibility of being dethroned is one of the things that one should expect when one signs a contract with BPCI.

Gloria cited her own experience as an example that a beauty queen title holder must abide by the details of the contract.

"Nung tumaba ako ng tatlong pounds they [Ms. Universe] threatened me that I have to lose the three pounds. I thought, 'Why? What do I care? I wanna be fat or whatever.' Hindi pa naman uso noon yung payat na payat. But because I had signed a contract for fitness, morality, etc... I always had a chaperone then. Twenty-four hours 'yan. I mean, hindi ako puwedeng mag-boyfriend and all that."

Gloria said other avenues, like show business, are still open for Maria Venus. "It's not the end of the world," she said.

BEAUTY TIPS. PEP praised Ms. Gloria Diaz for her lasting beauty, even at an older age.

She humbly accepted the admiration. "Am I? Hindi, e. I'm slowly disintegrating, e," she said.

The beauty queen said she just tries "harder" to maintain her good looks. "I think when you grow older, you just try harder and then of course you do conservative things. 'Wag kang uminom, 'wag kang magsugal, 'wag kang magpuyat. I try to eat less."

She said she even takes little naps while in a taping for her role in Diva, four days a week. "So pag nasa shooting ako, nagbabaon nga ako ng tulog. You know what I mean? Pag wala akong ginagawa, tulog muna. Kaya lagi ako nagbu-beauty rest."