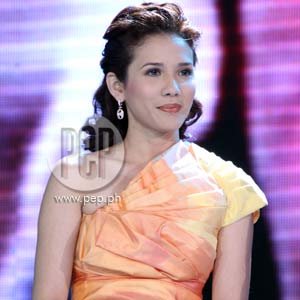 Karylle's alleged nip-slip during her March performance in Boracay for ASAP XV was Photoshopped. She said she was wearing a protective tape during that time, further proving the possibility of photo-manipulation.

After that of Anne Curtis, another "nip-slip photo" is circulating on the Internet and was published in a tabloid.

Photos of singer-actress Karylle with her right nipple allegedly exposed have been proliferating on the Internet since April 7 after her performance with fellow singers Arnel Pineda, Yeng Constantino, and Vina Morales for the summer edition of the Sunday noontime show ASAP XV last March 21. It was the same episode where Anne's nip-slip accident happened.

Karylle's photo can be seen in social networking websites and has been reportedly seen in cell phones, too. A local tabloid also published the photo and even printed different angles of it.

In her interview with The Buzz, Karylle confirmed that she was the one in the photo though she cannot comment about the possible manipulation of certain parts of it.

Karylle's mom, Zsa Zsa Padilla, has also expressed her frustration over the matter by Tweeting, "My heart is bleeding. How can people be so heartless?"

EDITED BY IMAGING SOFTWARE. The photo was revealed to be altered by an imaging software, and a graphic artist interviewed by the talk show explained how.

Media laywer Atty. Marichu Lambino of U.P. Diliman was contacted by The Buzz to give her say on whether Karylle had the option to sue the creator of the doctored image.

THE TABLOID DEFENDS. The people behind the tabloid that released the article and photo about Karylle's alleged nip-slip, defended themselves.

But for Atty. Lambino and Atty. Colmenares, the release of the photos by the tabloid was not covered by the Constitutional Protection for Journalists.

To further strengthen the impossibility for a nip-slip to occur, Karylle was wearing a protective tape during that time. ABS-CBN news correspondent Marie Lozano stated in her Twitter account that: "There was a wardrobe malfunction but not much was exposed because Karylle was wearing a nipple tape. Technically, no nip slip."

KARYLLE SPEAKS UP. Karylle was interviewed live after watching the VTR. How does she feel now about everything she's seen and learned?

How about her mom? Is she okay now?

"As a mom, she has been trying to be cool and calm about it," Karylle said. "It was very minor and she was, 'Okay lang 'yan, sometimes it's an accident.' Siyempre noong lumabas na talaga yung pictures and parang the worst you can expect, e, doon ko siya nakitang nag-weaken nang kaunti. Siya na nag-pray lagi."

Is she planning to file charges with the legal options presented in the earlier interview with the lawyers?

"Ngayon ko nga lang narinig na may karapatan...," said Karylle, adding that she has yet to think about it.

After that, Karylle said, "You're singing and you are so in the moment that you become careless and naisip ko lang na I was singing with Arnel on stage. Sobrang pasasalamat ko lang na kahit papaano I protected myself and wore something underneath."

To make it clear, the nip-slip seen in the photo, was it Photoshopped?

"There was an accident," Karylle said, "pero not to that extent."

In short, even though an accident happened and there was a wardrobe malfunction, the mere fact that Karylle protected herself earlier cements the truth that the photo seen on the Internet with her "nipple" showing was indeed manipulated.

What message does she have right now for her supporters?

"I just want to thank everyone who has been supporting me through all of this," Karylle said with a smile. "Medyo nakakalungkot ng kaunti pero thank you na lang sa family and friends who've been making sure that I'm okay. Thank you for explaining everything."