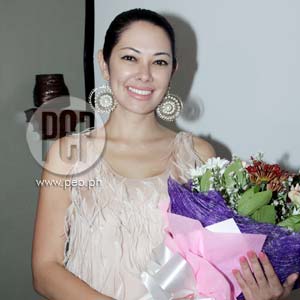 "You know, for me, I would love to watch all of the channels, all of the shows. I also want to know what my peers are doing, what the competition is doing. I think it's very healthy to know what the others are doing," said Paparazzi host Ruffa Gutierrez about checking out other Sunday talk shows.

At the press conference of TV5's 5-Star Special, which will feature Ruffa in its five episodes every Monday starting April 26, Ruffa expressed how excited she is to see her Tito Boy at the PMPC Star Awards for Movies on Saturday, April 24.

"I'm so excited to see Tito Boy, that's gonna be the first time to see him again," she told PEP (Philippine Entertainment Portal) and other members of the media.

Wouldn't she feel awkward to see her former colleague since she's already hosting Paparazzi, which is considered a competitor of The Buzz?

"I don't think it's awkward at all," replied Ruffa. "Even after I left The Buzz, Tito Boy and I have been in touch. As a matter of fact, he interviewed me for [his column "Direct Line] in the Philippine Star."

She added, "I don't think it's gonna be awkward. Tito Boy is not like that. You know, with all his interviews, he's even saying good words about Paparazzi, that there's room for everyone in this business. Tito Boy has been in the industry for so long that he won't really settle for cheap gimmicks. And he's not the type of person na maninira din ng kapwa. So, he welcomes us and he's very happy that we all have work. I think it's a healthy competition to try to be better and to give the viewers a choice."

What if she also bumps into Kris Aquino, who is also her former The Buzz co-host? It can be remembered that Ruffa had a misunderstanding with ABS-CBN Queen of Talk prior to her transfer to TV5.

Ruffa told the media, "I don't have any commitments that I've crossed paths with Kris. But I'm sure when I see her, everything will be okay. She's also the type na hindi nagkikimkim ng galit. So, I'm sure if we bumped into each other, we'll be very civil."

HEALTHY COMPETITION. Since she transferred to TV5, Ruffa says she has always been so busy with work that she never has the chance to see the programs opposite Paparazzi. She likes checking out programs in the other TV networks, though, to see how these are faring.

NO MORE COMPETITION WITH RAYMOND. Ruffa was also asked if there's a competition between her and younger brother Raymond, who is one of the regular hosts of GMA-7's Sunday talk show Showbiz Central.

The TV host-actress admitted that when she was still in The Buzz and Raymond was just starting out in Showbiz Central, she was very careful about broadcasting the result of the Sunday TV ratings.

That's no longer an issue since Raymond has become used to show business. "'Yong kay Raymond, as of now, wala na talagang competition or whatsoever. He doesn't care. We really support each other."

Ruffa also mentioned that as part of a family who are all showbiz personalities, she and her siblings should not be bothered too much with issues of rivalry.

She explained, "There's really nothing we can do kasi these are all programming from the network and hindi naman kami ang may hawak ng programming nila. We're such a big family. Can you imagine, lahat kami may trabaho, hindi kami puwede magtapat? E, iba-ibang istasyon kami. I think, it's best if we just leave it as a healthy competition and just be happy that we're both working."