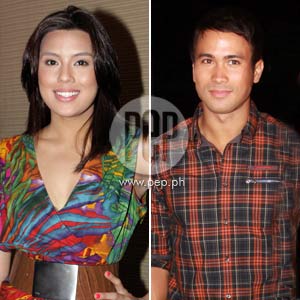 Nikki Gil (left) and Sam Milby posted their videos on MySpace to audition for a part in the hit American TV series Glee. "Just finished uploading my glee audition video. Can't believe I did it! Heehee. Well, gotta run after the dream," Nikki (left) excitedly said on her Twitter post.

Kapamilya stars and recording artists Nikki Gil and Sam Milby have tried their luck to be part of the Golden Globe Award-winning musical TV series Glee.

Nikki, who will be the lead actress in the musical play Legally Blonde, announced on her Twitter account yesterday, April 26: "Just finished uploading my glee audition video. Can't believe I did it! Heehee. Well, gotta run after the dream."

The 22-year-old singer sent a video of herself performing Cyndi Lauper's "True Colors," which was sung in Glee's "Hairography" episode during the show's first season.

Shortly after Nikki's announcement, fellow celebrities called for support by re-Tweeting her post.

The acoustic heartthrob sang "Lean On Me" by Bill Withers. This song was performed by Glee's singing group New Directions in its "Ballad" episode.

Nikki and Sam are not the only Filipinos who want to become part of the hit American TV series. A young Filipino-American named Kristofer Ruaro also tried his luck at a casting call held in Tennessee.

The 16-year-old Gleek, which refers to the avid fans of Glee, performed Queen's "Somebody To Love," which was sung in "The Rhodes Not Taken" episode.

Among the 250 aspirants who auditioned, Ruaro made it to the top 20. Unfortunately, he didn't get enough votes to be the lucky winner of FOX13 Glee Casting Call, whose audition piece will be reviewed by Glee's casting director.

You may cast your votes for Nikki and Sam by clicking on the "Gold Star" button on their respective audition pages on MySpace.