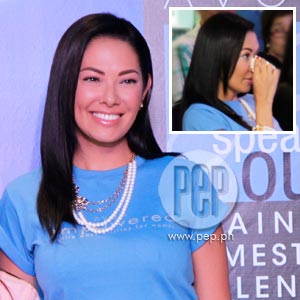 Ruffa Gutierrez couldn't stop crying while listening to the stories of domestic violence at the forum spearheaded by Avon Philippines. Ruffa was the host of "Speak Out Against Domestic Violence" held at the Ayala Museum in Makati City yesterday, May 20.

Ruffa has been very vocal about the cause as she herself admitted that she was physically harmed by her ex-husband Yilmaz Bektas.

Ruffa also mentioned that it was hard for her to move on before when she arrived from Istanbul because she did not own anything and she was at a loss on how to move on with her life.

MIRACLE. Ruffa confessed that before she came to the event that afternoon, she was crying because of a very personal matter. But her tears were tears of joy.

Pressed by the media to give details, "It's a miracle about my kids and their future–" but she stopped a bit because her eyes started to well up.

"I think today, God has given me that prayer that I have been asking for. And kahit na mawala na ako ngayon, kahit na bukas, magiging okay yung mga anak ko."

Ruffa though dashed hopes of any reconciliation or getting back together with Yilmaz.

TRIALS IN LIFE. Ruffa divulged that it was very hard for her to be alone in Turkey and experiencing "domestic violence." She said could only draw her strength then from prayers to fight the loneliness she was experiencing. She also pointes out that the yaya of her two kids were the ones keeping her company.

Speak Out Against Violence is an international campaign by Avon. Actress Salma Hayek was one of the spokespersons of the campaign back in 2005. Another Hollywood actress, Reese Witherspoon, is the global ambassador of the campaign.

The campaign enters its second year in the country in the hope of raising awareness and gathering funds and support for the Women's Crisis Center in maintaining its hotline activation program. The program receives up to 400 calls per month.