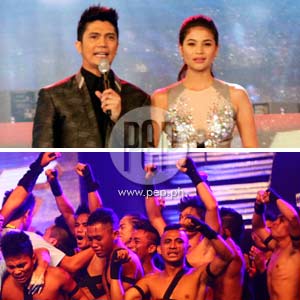 Their hometown, General Santos City, was rocked by an intensity 2 earthquake early this morning but the dance group XB Gensan dancers showed how to bring the house down—with or without an earthquake.

With their average score of 9.875 from the past judges of Showtime, the all-male dance group bested 10 other groups for the P1 million prize and the title of first grand champion of Showtime. The competition started airing live from the Ynares Sports Center in Antipolo City at 10:15 a.m. today and ended at 1:45 in the afternoon.

Showtime hosts Anne Curtis, Vhong Navarro, Kim Atienza, Teddy of Rocksteddy and Jugs of Itchyworms brandished their own talents before the start of the competition. Anne serenaded the crowd with her rendition of "On the Wings of Love" before she was whisked into the air on a harness.

During the first season of Showtime, a total of 73 hurados became part of ABS-CBN's talent search-variety show.

WILDCARD ENTRY TURNED WINNER. As soon as the XB Gensan dancers finished their routine, they knelt on the floor in gratitude and most of them were in tears. When hurado Jhong Hilario was called to give his comment about the group, he danced on top of the table and did a back flip that landed him on the stage. The Streetboys member then did back flips and cool dance moves on stage. He shook hands with the XB Gensan dancers before telling them, "Mahirap humakot ng fans kasi ang layo ng pinanggalingan n'yo pero nakita n'yo naman ang response ng tao. 'Pinakita n'yo sa buong Pilipinas kung bakit kayo ang dapat manalo."

At this point, Anne Curtis became teary-eyed and told them, "On behalf of the whole Showtime family, mahal na mahal namin kayo!"

Vice Ganda pointed out, "Ang grupo na ito, natalo na pero pinabalik [as wildcard entry]. Pinatunayan n'yo ang kasabihang, 'Never use your failures yesterday as your excuse not to strive better today.' You are too powerful, too fierce... Do you want war? I'll give you war!"

The Pambansang Hurado then went to the stage and Jhong Hilario joined him for a stunt. Vice Ganda threw himself at Jhong, who caught him expertly and twirled him around.

Kasibulan and the Enlighten Black Theatre Group both used mime and glow-in-dark costumes for their production numbers. Perlas ng Silangan used a harness for their members who hung upside down like spiders and even made their own set design. The group Philippine Islands Assassin combined martial arts with break dancing. The group with the youngest members, the Savannah Kids Ballroom Dancers, showed different forms of ballroom dancing.

The second season of Showtime will begin this Monday, July 26, on ABS-CBN.