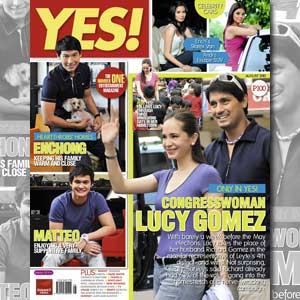 Leyte Representative Lucy Torres-Gomez shares with YES! some of her priority projects for her constituents: livelihood projects, energy, tourism, nutrition and sports. "I'm ready to get down to work and just do good for the district," she says.

Wife, mother, TV host, product endorser—these are the roles Lucy Torres-Gomez plays. Now the representative of the fourth congressional district of Leyte, she adds "congresswoman" to the list. In its August 2010 issue, YES! Magazine visits Lucy in her hometown of Ormoc City, Leyte and chronicles her journey to the political arena.

When her husband Richard Gomez was disqualified from the race, Lucy replaced him as the official candidate of the Liberal Party for the congressional seat and won. She said, "It was really the people who wanted something and someone new. Nangyari lang siguro na we were in the right place at the right time, but it could have been anyone."

Lucy shares with YES! some of her priority projects for her constituents: livelihood projects, energy, tourism, nutrition and sports. "I'm ready to get down to work and just do good for the district," she says.

The YES! exclusive followsLucyin Ormoc and witnesses the congresswoman in action, complete with over 60 photos of the neophyte politician at work, with her husband by her side.

How does Richard feel about playing a supporting role to his wife? He tells YES!, "Wala akong problema do'n... I'm an athlete, e... I'm trained to play as a member of a team. So ngayon na si Lucy 'yong naging team captain, let's follow her lead." Richard rallies behind Lucy as her chief of staff.

Despite juggling a hectic schedule filled with her responsibilities in Congress, her various showbiz commitments and her family's needs, Lucy has never considered sacrificing the time she spends with her family.

She explains, "My family will always be a priority, because my mom says no amount of professional success can compensate for a failure in the home."

The new congresswoman of Leyte's fourth district has this to say about her new responsibility: "One thing's for sure—I will really take my job seriously. This is not a game, something to add to my resumé. I really intend to perform. I can't say na I will be the best congresswoman the district has ever seen, but I really intend to do my best, whatever that will take."

Also in the YES! August issue, heartthrobs Enchong Dee and Matteo Guidicelli welcome youinto their homes, while the lovely Erich Gonzales and Andi Eigenmann take you for a ride in their personal vehicles. Get to know more about these young stars on the rise this month.

Grab your copy of the August issue of YES!, available in newsstands, bookstores, and supermarkets nationwide. A digital edition of YES! is also available for international subscribers, visit www.PEP.ph for more details.