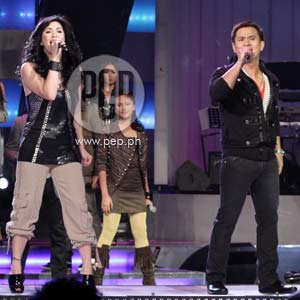 Ogie and Regine are said to have been in love for the past seven years.

Wedding bells will ring this year for popular singer-composer Ogie Alcasid, 42, and longtime girlfriend, Asia's Songbird Regine Velasquez, 40. The announcement was made by Ogie in the final moments of GMA-7's variety noontime Sunday show, Party Pilipinas, where Ogie and Regine are regular performers and Ogie heads the creative team.

Controlling his emotions, Ogie revealed that his marriage to Australian beauty queen Michelle Van Eimeren, 38, was dissolved last June 21, 2010. Regine, who was beside Ogie, was equally emotional yet self-controlled as she listened to his public announcement. She did not speak, but instead sang a powerful "Flaws 'n All," a Beyoncé Knowles' song with lyrics that go, "I don't know why you love me, and that's why I love you." Before that, Ogie sang her a stirring love song, his original composition, "Walang Iba."

Michelle and Ogie were married in 1994. When she flew back to Australia in 2003, with their two kids Leila and Sarah, now 12 and 7 respectively, rumors of trouble in the Alcasid household were confirmed. Also in 2003, rumors began that Ogie had fallen for Regine, his co-host in a Sunday television variety show. Through a YES! magazine cover story (June 2007), Ogie made public his love for Regine. Since then, Michelle has remarried. She married her boyfriend of many years, fellow Australian Mark Murrow, in November of 2009.

Present at Michelle's wedding were Ogie and Regine. (YES! carried the wedding photos this year.) Ogie and Michelle have remained good friends; Michelle and Regine have become close over the years. Michelle even did a phone patch on Philippine television defending Regine from detractors. She also said everyone should just be happy for all of them because, more than just being at peace with each other, they are one happy family.

When singer-composer Ogie was prodded to talk about their wedding he remarked, "Di malaking wedding—close friends and family lang." He said he did invite close celebrity-friends to the wedding, including Megastar Sharon Cuneta, who has said "yes." Broadway star Lea Salonga is being talked about as a possible singer at the intimate wedding.

Ogie did not mention it, but everyone is expecting Kris Aquino, and maybe even her brother Pres. Noynoy Aquino, to be invited. Ogie and Regine became specially close to the Aquino family when they campaigned for P-Noy in the last presidential elections. At the President's inauguration at the Luneta Grand Stand last June 30, Ogie and Regine were part of the limited A-list performers.