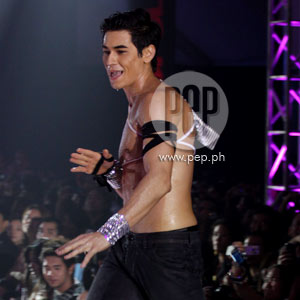 "Oo naman, of course," said the 26-year-old model in an interview with PEP (Philippine Entertainment Portal), during the Cosmo Bachelor Bash last September 9 at the World Trade Center, Pasay City.

Fabio is part of this year's Cosmopolitan Celebrity Centerfolds.

He added, "I still like her. Pero right now, like what I told, I'm just focusing in my work. I don't know...what's made to happen will happen. No one will change that, so...."

The Brapanese hunk also revealed that they still see each other.

"We still see each other, we still talking, pero now, we are just... I don't know we are just giving a break so..."

However, Fabio also admits he is enjoying being single.

"It feels... At the moment, I'm more focused in my work. I'm not seeing someone right now because it is really so hard, sobra mahirap... So it's hard to see someone at the moment. I enjoy being single."

COSMO BACHELOR. When asked if he had someone special watching him strut his stuff at the Cosmo Bachelor Bash ramp, he said, "No one really special. I have my sister. Of course, some really good friends, pero no one like really, really special."

He added that being part of the Cosmo Bachelor Bash is something he is really grateful for.

"Feels great! Feels good! I had so much in my career at the moment, and then this show just came to complement everything! " he exclaimed.

He said the event was his chance to show a different Fabio.

"I had so much fun. I could show a little bit of my other side.

"Kasi most of the time, I have a comedy show, di ba? Yung Comedy Bar. And now, ito. At saka yung Yaman ni Lola [GMA-7 reality show and sitcom].

"Today is nice. I feel really sexy and...to bring the wildness in the people watching.

"Feels good to hear people scream your name, trying to flirt you, trying to get you.

To prepare for the event, Fabio said he had to sacrifice for four days.

In a matter-of-fact tone, he said, "And to be honest with you, I'm gonna go to a restaurant to eat a lot [after this], kasi I really need food! I

"I've been four days on a diet for this show."

Confident that he did a good job, the amiable Fabio said, "I just wanna make people happy. I did my job so...I think the people liked it, they enjoyed the show. So right now, I'm gonna reward myself with really good food."

After the Cosmo Bachelor Bashstint, is he ready for more sexy roles and appearances?

However, he said that he is open to the possibility.