FIRST READ ON PEP: "I feel my personal life has to be put in order."—Kris Aquino 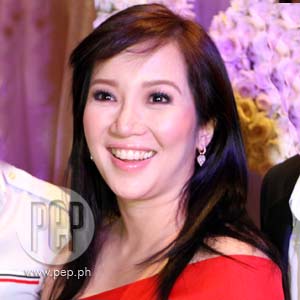 One of Kris Aquino's realizations while reading her annulment papers: "The unjust thing in our society [is that] a working mother has to be not only the breadwinner but, pag nagkasakit, ikaw nagbabantay buong gabi, pag may school project, ikaw ang tutulong gumawa. Lahat, lahat talaga..." This, she said, is one of the reasons why she doesn't feel daunted by breakups. With or without a man, she now feels she can do everything on her own.

In the course of splitting with husband James Yap, Kris Aquino knows that she has been judged many ways, many times over. Her detractors feel less sympathetic towards her and more inclined to commisserate with James, thinking that the breakdown of her marriage must mostly be her own doing.

On September 29, when Kris was relaunched as the premier endorser of the Belo Medical Clinic at the Red restaurant of Shangrila-Makati, all this did not show. Kris was her usual bubbly self.

"I'm back with the best!" she said twice, in a happy tone.

Of course, she had just closed her doors on two important things in her life—her hosting job in ABS-CBN's Pilipinas, Win Na Win! and her five-year-old marriage.

She admitted feeling a bit cheerless when she learned about losing the job in the noontime show, but said she later welcomed it as a blessing in disguise.

"Honestly, before any other thing, I feel my personal life has to be put in order," the host-actress began. "Kasi, if I look back at the entire year, from August 2009 to now, I haven't really had the chance to just reflect—the loss of my mother, the campaign of my brother, the demise of my marriage."

She knew these have not been simple episodes in her life. But all she was able to do to recover, she said, was have a short break with her family and seek refuge in her work.

"Kasi, I think, anybody who has gone through a breakup and gone through the loss of a parent, all in a span of one year, yung parang the two pillars of your life, nawala...

"So, ngayon ang kailangan ko is to make sure okay ako within, para my kids will really be okay."

HER ONLY REGRET ABOUT ANNULMENT. Two months since she made her "it's over" announcement pn The Buzz, her annulment case is now in progress at the Makati Regional Trial Court.

She is particularly feeling repentant because she went against one of her mother's wishes.

"I take that as the one lesson in life talaga na everything na sinabi ng mom ko sa akin has been 100 percent accurate."

When asked if she ever regretted being married to the cager, her answer was no.

"I have Bimby, di ba," she said, referring to their son, Baby James.

The Kapamilya star continued, "The regret, if you ask me, was that my mom had said to me, 'I only ask you one thing, humingi ka ng pre-nup [pre-nuptial agreement] para ma-secure mo si Josh." Josh or Joshua is her son with actor Phillip Salvador.

"It was not for any other reason. And sana huwag sabihin ng mga tao na naging matapobre ang pamilya namin or anything like that—hindi, e.

"My mom's concern was because Josh is illegitimate. Josh is a special child who has so many needs.

She restrained herself when talk went to the terms of the annulment settlement, but was frank enough to reveal: "Kung meron man akong iniyak in this whole thing, nalugi talaga ang panganay kong anak."

"It's my fault wala kaming pre-nup, so I'm paying the price for it. Kasi, if there was a child prior to that marriage, yung interest of that child, nasa-sacrifice. Kasi yung conjugal [sa batas], hindi siya [Josh] kaparte ng conjugal na 'yon, e."

At this point, elaborating on how painful it is to have Josh's future affected adversely by the annulment, Kris's voice shook.

She said that if there are two things she has been praying for, these would be—first, that her three-year-old son will not forget his Kuya Josh; and second, that she will live longer than her mom so she can take care of Josh.

"Alam naman nating lahat that Bimby will be a huge success," she said.

"Kaya gusto ko lang talagang ma-make sure na mabuhay akong matagal to be able to take care of Josh because he's the one who needs it."

A reporter brought up the issue of financial support.

Kris didn't give away too much on this subject. She said, "Wala. Hindi ko hiningi. At hindi rin naman in-offer. Kaya wala."

JAMES YAP'S POSSIBLE INCOME. The sought-after endorser could not give a clear-cut explanation why her husband—who, according to her, is presently the "highest-paid" player in the PBA (Philippine Basketball Association)—did not pledge any amount for their son.

(At the PBA, although P350,ooo/month is the official cap on salaries of professional ball players, which officially totals P4 million/year—the real income of a well-known player does not go down P500,000/month. This is according to sports editors PEP spoke to.)

(Neither does the income end there, say the sports editors. There are many bonuses coming from team owners: win-game bonus, quarterfinals bonus, finals bonus, victory bonus, Mythical Five bonus, MVP-award bonus. There is also free travel and other behind-the-scenes deals or side agreements possible between the player and the team management, which may not show on the official contract. Then there is the most lucrative of all: their endorsement fees.)

During the Belo press launch, Kris said only, "But it's in my position to say na hindi ko hiningi 'yan. And siguro also, hindi mo naman kelangan hingin.

Kris made it sound like it's no big deal to her, but she did say this wish aloud: "Sana lang na, pag may mangyari sa akin, hindi niya pababayaan si Bimby. Yun lang."

LESSONS LEARNED. Kris is grateful, she says, that throughout this ordeal her sisters—Ballsy Aquino-Cruz, Viel Aquino-Dee, and Pinky Aquino-Abellada—have not left her side. She also didn't get any I-told-you-so line from any of them.

But they did say, "Sana natuto ka na."

And when it comes to her marrying again, "Ayaw na nilang lahat!"

Then Kris added, "Yung parang, at least, in all fairness my family has a sense of humor about me."

The Queen of All Media—which is how Kris was referred to during the Belo launch—shared this:

"They said it best. Na it was difficult enough to have a relationship with me when I was just Kris Aquino, the star, what more in the next six years that I'm Kris Aquino, the youngest sister of the President, di ba?

And what do her kids say about her finding a new love?

Her face lit up as she recounted, "Sabi ni Bimby, 'Mama if you have boyfriend, ibabang-bang ko siya.' So yun talaga... So parang mahirap talaga.

"Si Joshy, tinanong ko, 'Can I have boyfriend?' 'Yes, Mama. Basta si Yaya A, no boyfriend.'" Yaya Ana has been taking care of Josh for 15 years now.

AVOIDING GOSSIP. So far, two guys have been linked to the youngest sister of President Noynoy Aquino.

The first was Makati Mayor Junjun Binay, whose sighting with Kris in Glorietta 4 last August 30 created a buzz. The moment was later satisfactorily explained as an accident of circumstance, but the buzz had reached far and wide.

Their status now, according to the Kris: "We stopped talking."

She went on to explain that Junjun, the current Mayor of Makati City and the son of current Vice President Jejomar Binay, even visited Bimby when the latter was hospitalized recently. But she underscored that they were just friends—and that she still made the decision to stop talking to him.

Her explanation: "Kasi I want to be proper, and he understood it. Sabi ko, 'Kahit na friends kami, mami-misinterpret yung friendship natin.'

"And then, I talked to him after that, and then I said that, 'Even if we're just friends, it will be subject to misinterpretation by so many people, so, kawawa ka naman. Lalo na na ikaw ang may karapatan na manligaw ng kahit na sinong gusto mong ligawan.'"

And to put an end to all rumors reviving her past with ex-boyfriend Joey Marquez, she categorically said during the interview that the Joey M she referred to recently was not Joey Marquez.

"Joey Manahan nga!" she exclaimed. "He was so nice to us, kasi he's a state representative in Hawaii who is in charge of tourism.

"And because sinabi niya na, 'So many Filipinos know her and she'll promote it...' And then I had a whole magazine spread about Hawaii and all, so yun, he kinda upgraded kami.

BEING CIVIL WITH JAMES. When the topic finally segued to her husband, she said they were on speaking terms. "But we cannot be best friends," she declared.

"And I know na everything I shared with her, hindi...hindi buong Kongreso o buong Ormoc, makakarinig, alam mo yun?

"In the same way that my friendship with [my managers] Deo [Edrinal] and Boy [Abunda] is like that, with my cousin Rina [Teopaco], it's like that."

And she admitted that she could not commit to that kind of friendship with the man who was her husband of five years.

But she said she will always be civil to James. "We'll be polite with each other. And we have a common goal, to raise a good citizen in our son."

Continuing, she said, "Pero it's not like I'll share my secrets with him, and it's not like he's gonna tell me na, 'Hoy nililigawan ko na si ganito,' di ba? Walang ganun."

At this point, she touched on her background: "I saw my mother play all roles, and so maybe that has been partly why it's been difficult for me to succeed in a relationship.

"Because my role model was someone who was alone, and who really gave her children 100 percent of herself."

Cory Aquino had to play mother and father to the family because Ninoy—the original politician in the family and the man touted to succeed Ferdinand Marcos as president of the republic—was immediately thrown into a Marcos prison during martial law. He was allowed to rejoin the family, but only in exile in the United States, when he needed heart surgery. Cory stood as the center of the family throughout those years.