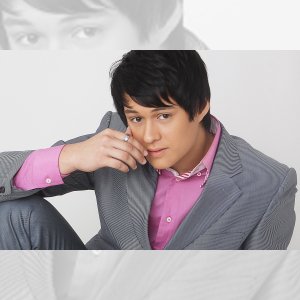 When PEP.ph asked Enrique Gil who among the local actors today he would like to emulate, he answers, "I think I would be like John Lloyd Cruz. That would really be nice."

Young Kapamilya actor Enrique Gil has been in showbiz for two years now. First he had guest stints in Pieta (2008) and I Love Betty La Fea (2009), before being added to the regular cast of George and Cecil (2009) and Rosalka (2010). Today he is a regular performer in the high-rating ABS-CBN Sunday variety show, ASAP XV, as part of The Gigger Boys.

But after two years spent in showbiz, he really still feels like a newcomer in the industry.

"I'm okay. Trying to fit in show business 'cause I've been here for two years, but I'm not really, fully... Parang there's a feeling that I'm a newbie," Enrique tells PEP (Philippine Entertainment Portal) in an interview, September 15, at the photo shoot for the STAGES family, at The Room in Quezon City.

"Every time you do a new show, it just feels like it's your first time," the 18-year-old actor adds. "I don't know if that's what the others feel, but for me until now, it's so...

"And then, you do better from before, but it's just a feeling like you've never done it before, you know? It's parang first feeling lang. Kaya... gano'n naman lahat sa start, e. Parang there is a challenge."

He says he only feels like a pro while dancing for ASAP XV.

But instead of feeling down about it, Enrique tries to make his apprehensions produce valuable lessons.

NEW SHOW. Enrique proudly reveals that his upcoming show for ABS-CBN will involve lots of dancing—which is a good thing, he says, because he expects not to feel as awkward anymore.

"It's a youth-oriented show, like, it's mainly for dancing. It's for the youth, for everyone to know that no matter what your difference is, you can still be with other people through dance. It unites you. Kahit iba-iba yung walks of life, it unites you," he says.

"Makikita niyo sa story. Like ako, hint lang—I'm poor in the show. It's kinda crazy. I'm in a crew, a group of dancers, and yung iba, mayaman. Dance unites all kinds of people in all walks of life."

"I still have a lot of work to do for the new show kasi ang daming sayaw... So, for the new show I get to work out even in work. Kasi sasayaw nang sasayaw, so pawisan 'yon, so it's a double workout," he says.

SHOWBIZ ROOTS. Enrique Gil started acting in the summer of 2008. He was 16 years old then, and boredom led him to enroll in commercial modeling workshops as well as musical theater workshops conducted by Trumpets.

Commercial modeling, he claims, was easy; musical theater was not.

"I didn't like theater talaga," he recalls. "I'm not kind of a singer kasi, so I don't really do theater. I'm more into dancing, or acting. So more on commercials lang. And then they saw the potential."

As a result, Enrique appeared in a series of commercials. Then Enrique became part of Star Magic, ABS-CBN's talent arm and the biggest one hereabouts.

He narrates, "Tamang-tama, Mr. M [Johnny Manahan, chairman emeritus of Star Magic] was looking for a new batch of artists. That's when he texted Tito Audie [Gemora from Trumpets], 'If you have talents, bring them here!' So, pinasama na rin ako. Pero, my mom and Tito Audie talked to train me for one year, then bring me to show business.

"Lahat ng STAGES talent pinapunta doon. I didn't even know what to say, I didn't even know anything about ABS-CBN. Like I don't watch TV kasi, like Tagalog. So, I was totally blanko when I entered. And then, he's intrigued siguro. Ang daming taong nag-go see, e.

From then on, Enrique says he started researching on local shows and movies— and came to the realization that he actually wanted to be in showbiz.

"I started watching, and I learned that's it's really what I wanted to do. Like I want the job. I like the job, that when you do something and you see that people appreciate what you're doing," he says.

"Well, anywhere that they see I could excel on, or kung sa'n sa tingin nila babagay ako. I think they would know more," he says.