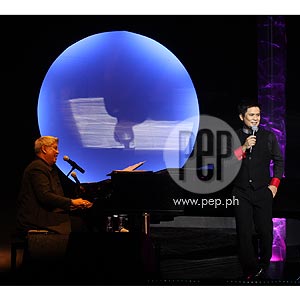 "Siyempre, masayang-masaya ako kasi OPM is the music that we all fight for and we all live for. In this concert... we wanted to reintroduce Filipino music to our audiences," says singer-songwriter Ogie Alcasid about the positive turnout of his concert with Ryan Cayabyab on October 8 at the Philippine International Convention Center in Pasay City.

"Hooray for OPM!" shouted singer-songwriter Ogie Alcasid and Maestro Ryan Cayabyab before proceeding to woo their audience with carefully chosen Filipino music in their recent concert, The O.C. at the P.I.C.C.

Then he sang his very own "Nandito Ako," performing it Reggae style.

After setting the mood, the award-winning music artist formally introduced himself: "Hi, I'm Ogie Alcasid and I'm married... to Filipino music, that is."

And yes, the audience started falling in love again.

When it was time to recall his own hits, Ogie performed songs that pledged his undying love to OPM and his bride-to-be, Regine Velasquez, a.k.a. Asia's Songbird.

At the end of "Pangako," which was sung by Regine in her movie Pangako Ikaw Lang (2001), Ogie changed the lyrics: "Magmula ngayo'y tayong dalawa ang mag-asawa."

The audience became even more "kilig" when Ogie went down the stage and over to Regine while singing "Kailangan Kita."

It was a special moment and she started to cry. "Para kasing you're just watching it and suddenly he's there. It's wonderful, di ba?" Regine told PEP (Philippine Entertainment Portal) after the show.

TAGALOG AS THE BEST LANGUAGE. "Tagalog, the Filipino language, is the best language in the world because it's very expressive," Ogie said.

"For a song to become a hit, there should be a 'hook' so people will remember it," added Mr. Cayabyab.

To illustrate this "hook," Ogie and the RCS belted hits by the Aegis band and April Boy Regino.

Then in a Videoke-like presentation, the singer-composer performed a Korean pop song with Tagalog lyrics. To acknowledge the sponsors of the concert, he performed "Nobody," a dance pop song recorded by Korean girl group Wonder Girls.

"FREAKIN' REGINE VELASQUEZ." Some members of the audience thought the show was over. Just then, the Queen of Comedy, Ai-Ai delas Alas, appeared onstage in a wedding gown.

Ogie and Regine call each other "Honey."

The comedienne brought the house down with her impersonation of Asia's Songbird. Regine, who was in the audience with her family, laughed so hard she almost cried. Again.

APO WITH A TWIST. Ogie and the RCS staged songs of the local music industry's best-known trio, the Apo Hiking Society, whose two members, Jim Paredes and Boboy Garovillo, were in the audience.

The Apo, according to Ogie, has been giving Filipinos good advice and reminders through their music.

But Mr. Cayabyab gave these a twist by adding an Armida Siguion-Reyna-like rendition of "Aawitan Kita," sung by the ladies of the Ryan Cayabyab Singers.

Jim became emotional when Ogie, Mr. Cayabyab, and his group performed "Handog ng Pilipino sa Mundo" towards the end of this segment. The song was released by the Apo a couple of months after the People Power Revolution in 1986.

NOEL CABANGON ON PATRIOTISM. Ogie gave up the stage to his special guest—singer-songwriter Noel Cabangon.

His "Ako'y Mabuting Isang Pilipino," which he performed at the inauguration of President Noynoy Aquino, once again struck home with its message of patriotism.

He asked everyone in the audience to stand up, raise their right hand and pledge to become good citizens of the country.

Ogie said he was able to forge a good relationship with Noel during the presidential campaign of PNoy. In fact, their friendship has produced a song, "Bagong Pilipinas," which they dedicate to all Filipinos.

"God willing we'll probably do more shows. Noel and I have become good friends. It was really a fantastic night," said Ogie in an interview after the concert.

Noel also joined Ogie, Mr. Cayabyab, and the RCS during the finale, which focused on the national anthem, "Lupang Hinirang."

The audience couldn't get enough of OPM and yelled "More!"

After two memorable hours, there were still OPM hits waiting to be sung.

"Ang lawak-lawak ng musikang Pilipino. You cannot fit all that in two hours... Baka may part two," said the OPM president to the delight of the crowd.