Vina Morales on her love life: "With or without a partner, I could still be the best mom for Baby Ceana." 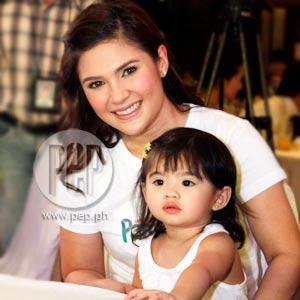 Vina Morales says that she trusts younger sister Shaina to make her own decisions, and adds that she will always be behind Shaina.

The obviously happy mom said that, even with her busy schedule, she made time to join Ceana in her playtime.

"I make sure that I make time for her. Even though alam mo minsan sobrang pagod and kailangan mong matulog. Imbes na itulog mo, hindi mo na itutulog, e. I'd rather spend it with Ceana.

"Every playtime moment, I get to see kung ano yung bago sa kanya. It's really nice kasi you really get to know each other, you spend time with each other," the proud mom said.

The talented singer also said that as early as now, she could see that her daughter has an interest in music—like her. "Every time, like, I need to learn a song that I need to record, or if I have a concert—I play my songs and she sings with me and dances with me. So, nakakaaliw lang."

SANS A PARTNER. With her relationship with only daughter Ceana going strong, Vina attempted to answer, if tentatively, queries about her lovelife.

She said, "Ako kasi, as much as possible, kung meron yung konting privacy na hinihingi ko sa inyo, naibibigay niyo naman yun sa akin. But you know, sinasabi ko paulit-ulit, with or without a partner, I could still be the best mom for my baby Ceana."

Vina added that even with a family set-up where there is just her for a parent, she is confident about fulfilling her duties as a mother.

The talented singer admitted that her life is not perfect, but added that no one's life is. She also said that she was content with what she had at the moment.

"So, you know, may mga kanya-kanya tayong mga buhay na pinagdadaanan. So ito 'yung buhay ko, and I'd rather...na masaya naman kami ni Ceana e. And, you know, the Daddy's there.

"Walang perpektong buhay. So yun na lang talaga, you just have to be contented and thankful for what you have, and for the people that you have in your life," Vina told PEP (Philippine Entertainment Portal) and other members of the media present that afternoon.

In a lighter mood, Vina blurted out, "Wala naman bumabatikos sa lovelife ko. I mean, who are we to judge other people?"

Vina also answered the issue linking her to Executive Secretary Paquito "Jojo" Ochoa. There were blind items saying the two were seen in a public display of affection (PDA) at the lobby of a hotel.

Vina does not deny or confirm the story, which was first published in PEP, not as a blind item, but as a tweet in PEP ALERTS.

Instead, the talented actrees-singer-host said, "There's nothing to clear kasi. This will be the last time. I really respect that person. I've met him once. Huwag niyo na akong intrigahin sa kanya.

ON SHAINA. Vina was also asked by the press about the issues surrounding her younger sister, Shaina Magdayao.

She was vocal about her support of Shaina and Shaina's relationship with John Lloyd Cruz.

But she made clear that Shaina decides her life on her own, and that she, as the older sister, was just there to support the younger one.

Asked about the last malicious rumor that circulated about her sister and boyfriend John Lloyd being caught in a sexually embarrassing situation, Vina dismissed the issue: "It's an old issue and we have to move on."

Then she puts in, "And Alyna is doing good! I think it's doing number one sa timeslot ngayon." Alyna is the ABS-CBN afternoon series where Shaina is the lead star.

In Alyna, the sweet Shaina showed her sultry side. Is this something she consulted Vina about?

Vina adds that she always tells Shaina: "To be strong, to pray always for guidance, and everything will fall into place."

ON BOX-OFFICE STAR JOHN LLOYD. Vina also commended John Lloyd for his sincerity and support for her sister.