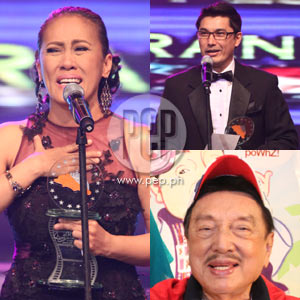 The third and said-to-be last installment of this comedy franchise from Star Cinema took home a total of nine awards, including Best Picture and Best Director for Wenn Deramas.

Ang Tanging Ina Mo's lead star, Ai-Ai delas Alas, got her wish when she was named Best Actress for her portrayal of a single mother to more than a dozen children. Ai-Ai was very vocal in saying during interviews that she wants to win the best-actress trophy.

Interestingly, the other two nominees for Best Actress are Marian Rivera for Super Inday and the Golden Bibe and Carla Abellana for Shake, Rattle & Roll 12.

Jennylyn Mercado of Rosario and Kris Aquino of Dalaw were not nominated.

This year, the MMFF Committee decided to mention only the top three nominees for each category.

Meanwhile, it was a double victory for Comedy King Dolphy as he won both the Best Actor trophy for his comedy film Father Jejemon and Best Supporting Actor for his drama role in Rosario.

In the Best Actor category, Dolphy won against Vic Sotto of Si Agimat at Si Enteng Kabisote and Yul Servo of Rosario.

The Comedy King was not able to attend the ceremony.

The comedienne also wasn't able to accept her award personally since she is now in the United States. Direk Wenn Deramas accepted the award on her behalf.

However, the film's director, Albert Martinez, was not in the list of Best Director nominees.

The MMFF Committee showed no love for the two horror entries—Dalaw and Shake, Rattle & Roll XII—as both went home empty-handed.

The 36th MMFF Awards Night was hosted by the Gutierrez siblings Ruffa, Raymond, and Richard.

Faces of the Night: Bong Revilla and Sam Pinto