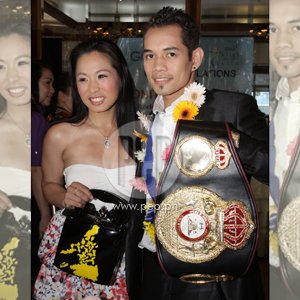 "'Enough is enough,' Nanay Donaire (Mom Donaire) told Anthony Andales. She wanted to clarify everything and to let her world champion son know that she is listening and will spank him if he keeps on lying.

"'Again, I'm not here to fan the flames, but to relay a message from a very concerned Mama. The Mama said it's about time for her to speak to let her son know that she's been listening to all the lies thrown around against his dad. And as a mother, she will not tolerate the bare-faced lying by her son.'

"Nanay Donaire, who is a 3rd order Augustinian secular and a church choir member, told me that hearing her son not tell the truth makes her sad. So after reading Tris Dixon's story she said to herself that this needs to be stopped.

"First, Nanay Donaire said that Nonito's dad didn't steal any money. The $240 Nonito Jr. accused his dad of stealing from him was used to feed the boxing staff.

"She added: 'Did Dodong (Nonito Sr.) accuse his son of stealing money when he spent lots of money raising him? Paying his phone bills, rent and other expenses? No the dad never accused his son of anything because he loves his son.'

"When I spoke to Nonito Sr., he recalled the Moruti Mthalane fight in Mandalay Bay, he was supposed to make $30,000 but after the fight, Junjun (Donito Jr.) and Rachel only gave him $20,000.

"'Did I accuse him of stealing? Never, I never did,' the elder Nonito said.

HE TRIED TO BE LIKE PACMAN. "Nonito Jr. tried very hard to make himself look like Manny Pacquiao, like growing up very poor, with almost nothing to eat, no food at the table, smallest share in the table. Nanay Donaire said they were poor but not as poor as his son said.

"Nanay told me she was a teacher and Dodong was a soldier, there was always food at the table, maybe not [a lot] but [there] was always enough for everybody.

"Nanay Donaire was also surprised that Nonito Jr. was jealous of Glenn.

"Growing up, Junjun recounted that his my family always said, 'Glenn's good-looking. Glenn's better than you, Glenn's this and this. Glenn's the best.'

"'Anthony, I am very sad to read this one, how can he carry this in his heart? If he thinks that he was overlooked he should have shut his mouth. His brother Glenn even supported him because he was not working, he only boxed,' Nanay Donaire said.

"'Glenn gave him money, or shared his money, and he didn't care because he is his brother and they have a pact. No he can't mention those things, we never did that to him.'

NEW RULES. "Nanay Donaire recalled that when she watched her son fight in Manila, the first thing Rachel's dad did was to give her the rules: She can't go near her son anytime she wants, she can't always ask for something from the son... she can't go in to the ring in case Junjun wins.

"She told me that she threw that paper away, she only read a portion of it... Now the time comes, Junjun won, if my recollection is correct, he knocked out Raul Martinez in 4 rounds, and GMA TV approached Nanay Donaire and she stood up, and Nonito's new mommy (Rachel's mom) reacted right away and said: 'Why did you get up? Did you [not] read the rules?'

"Nanay Donaire, being polite, answered, 'I can't make those GMA guys wait for me...'

"Still in Manila, she said she had a room provided by her son, but that afternoon, Rachel told her to just go downstairs and stay with five other relatives (room is very small though) because her room will be given to Dr. Ed Dela Vega. (The doc is more important than the mom? Hmmm...)

"But she knew that Doc Ed was in another room... [then] she learned the room was given to a bodyguard commissioned by Rachel.

INVITE TO JAPAN. "Recently, Nanay Donaire was invited by her son to visit him in Japan. Nanay jumped at the opportunity. First she missed Nonito a lot and she thought this was maybe the chance to salvage a compromise. She told me that her main purpose was to bring peace and reconciliation.

"Nanay asked her son, 'Why don't you call us anymore?'

"The son said, 'I totally forgot about you guys, coz I'm happy with my new family.'

"'You know your dad lost his job and he has some kidney problem, maybe you can help him,' Nanay said.

"'Jun, your dad made you a champion, he sacrificed a lot for you, he quit his job and lost his retirement,' Nanay pointed out.

"The son, in an arrogant manner, said 'That's his fault that he lost his retirement, no mercy and no guilt towards him.'

"'Jun, I thought you said that we'll help each other once you become a champion,' Nanay said.

"'That was before, mom,' the misguided son said.

WHY IS HE DOING THIS TO HIS DAD? "Donito Sr. said: 'I don't know why he's doing this to me. I love all my kids because I lost my dad when I was 3 years old... So when I read all his lies, it crushes my heart and it hurts his brothers and sister also.

"'I didn't force him to box either, he chose to do karate, he could do the split... but when he saw Glenn win trophies, he told me that he'll box also. I dragged them on weekends to run, I held both their hands to run in the Marina. There was no jealousy at all, we were happy. We had a goal to help each other, we had a pact.'

"Both parents recalled that after Donito Jr. knocked out Darchinyan, the former reportedly said: 'Ma, Pa you don't have to work anymore, we'll buy a new house, we will live together, we gonna be happy. But those promises perished when he got married.'

"He quarreled with his dad and he didn't help Glenn train against Ulysses Solis. He didn't show up for sparring. Maybe jealousy drove his intentions at that time. If Junjun helped Glenn in that fight, the outcome might have been different.

"I asked Nonito Sr. if he had any favorites among his kids? 'No,' he said. In fact, Junjun is his favorite because he was sickly.

STAND BY HIM. "Nanay Donaire said she just hopes his new family will stand by him all the way, not just for fame.

"I asked Nanay, what if her son loses to Montiel on Feb. 19? What if this would turn him around and make him humble?

"'I don't care if Montiel will win,' she said. 'Junjun destroyed his reputation every time he throws lies against his dad and our family. And if Rachel is a good wife, she should teach her husband to respect his parents.

"'But what happened? She tried to pull Nonito Jr. away from his own family,' Nanay said.

"The Donaire siblings don't want their mom to talk to the media because they think that it'll just make the problem worse. But now, after reading Tris Dixon's long story, they asked their Mama to talk.

"The siblings think their brother needs some spanking, that only Mama can do that. And Mama told me that Junjun might read this and he should stop spreading lies, especially about his dad."