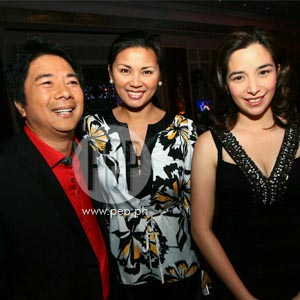 Willie Revillame (left) poses with ex-wife Princess Punzalan (middle), whose arrival came as a pleasant surprise to the birthday boy. At right is rumored girlfriend Shalani Soledad, a co-host in Willing Willie.

But last night, January 29, Willie's staff was bowled over by the early arrival of the controversial TV host.

Instead of 7:00 p.m., the doors to the grand ballroom were opened at 8:30 p.m. "Bilin po ni Sir," was the polite spiel of the Makati Shangri-La receptionists.

THE PARTY TURNED INTO A CONCERT. A stage had been set up in the middle of the hotel's Rizal Ballroom where the celebration was held.

In the lobby were the buffet tables and an ice carving of the letter "W" placed in a prominent position.

The program turned into a concert with Nico Maca + Playground serving as front act.

At past 10:00 p.m., while people chatted over drinks, Willie emerged onstage.

The comedian, who turned 50 last January 27, officially opened the program with his hits "Ikaw Na Nga" and "I Love You."

One of the most-applauded performances was the reunion of '80s hit singers Raymond Lauchengco, Gino Padilla, and Dingdong Avanzado.

The trio dished out songs they described as "panahon ni Willie," such as Spandau Ballet's "Gold," Naked Eyes' "Always Something There to Remind Me," Busted's "Build Me Up Buttercup," JoBoxers' "Just Got Lucky," Van Halen's "Jump," Depeche Mode's "Just Can't Get Enough," Starship's "We Built this City," among others.

THE SCENE. The stage glittered with performers, but the sidelights were decidedly more interesting.

Willie's ex-wife Princess Punzalan arrived with Caridad Sanchez, and they shared the table with the celebrant's mom, Mrs. Myrna Buendia.

In town for a brief visit, Princess received an invitation to Willie's party and decided to attend.

"Wala. Ngayon pa lang kami magkakausap," she said when asked if she's constantly in touch with her ex-husband.

Her wish for Willie: "Sana makita na niya ang love of his life."

Her message for him: "Personal ko na lang na sasabihin."

The reason for the talent manager/host/columnist's delayed departure arrived a few minutes before 10:00 p.m. Looking lovely in a black dress, Shalani Soledad met Manay Lolit at the entrance of the ballroom.

Inside the main venue, Shalani passed by Princess' table, where the two women cheek-kissed.

Meanwhile, Isabel Oli had arrived and was introduced by Viva's big boss Vic del Rosario to the chairman of TV5, Manny Pangilinan.

The same thing happened to Pops, who was introduced by Annabelle Rama to MVP, nickname of the Kapatid Network's big boss.

But the scene-stealer was Rico J. Puno, who talked about two things that night — the rift between Willie and John Estrada, and his upcoming show on TV5.

The breakup of good friends John and Willie was witnessed by Willing Willie viewers last January 26.

When Willie found out that John had accepted the offer to host ABS-CBN's noontime show with Randy Santiago, the 50-year-old TV host became upset.

THE WELL-WISHERS. At his birthday celebration, Willie hardly felt John's absence. The party was filled with supporters in and out of the business.

Sexbomb dancers' manager Joy Cancio also showed up, and even joined Anna Feliciano, the choreographer of WW.Girls, on the dance floor.

Quietly observing the festivities and—from time to time—chatting with his guests, Willie looked unbeaten, confident of weathering any storm.

Is his life complete?

How about his love life?