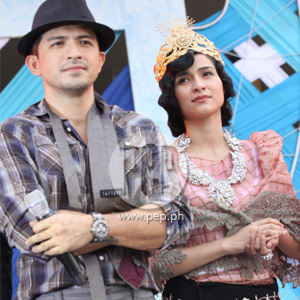 Dennis Trillo and Jennylyn Mercado are shown in their costumes in the Metro Manila Film Festival 2010 entry, Rosario. It was their second MMFF project. The first was Blue Moon, where the 29-year-old actor played the grandson of the main character Manuel Pineda, while the 23-year-old actress portrayed the young Corazon, the greatest love of Manuel.

Almost a year after actor Dennis Trillo declared his love for actress Jennylyn Mercado, the handsome couple have parted ways.

Meantime, PEP contributor Roldan Castro has sent several messages to Jennylyn's manager, Becky Aguila, asking for confirmation about the parting of ways of the two stars who captured the public's imagination a year back when they, both single parents with sons with past partners, fell in love with each other. The messages were sent last night and this morning.

The information that the two have already been separated for weeks now comes from someone who is a friend to both stars and who believes there is no reason for the public not to know that the two are now free to be with other partners. The source adds, however, that whether one, or both, of the stars will want to get back together is up in the air.

A "SMALL AND MABABAW" FIGHT. The source says that a terrible fight several weeks back led to the breakup. The fight started as "small and mababaw," the source adds, but it apparently brought out the worst in both stars, who ended up hurling hurtful words at each other before angrily stomping out of each other's lives.

In a jealous fit, Dennis is said to have cursed and humiliated Jen. According to the PEP source, the actor/singer seems to have had a long-standing issue with Patrick Garcia, the father of Jen's only son, still being a presence in Jen's life.

The PEP source explains that Dennis—although Jen has credited him publicly with making her reconciliation with Patrick possible—resented the continuing connection between the two. In the source's words: "Ang panghihiram ng bata is a big isyu pala with him."

On Jen's part, during the fight, the 23-year-old StarStruck "first female survivor" was also losing her temper badly, cursing him, and fighting back. At one point, Jen is said to have physically hit the 29-year-old award-winning actor.

The same initial information also says that the actor, already heated up by the actress's behavior at the start of the fight, retaliated by cursing her some more, shouting at her to get out of the house, and making certain she got out the door.

According to the PEP source, the words he let loose on her were such "that anyone hearing it would have crumbled. Sakit sobra."

This morning, PEP associate editor Erwin Santiago followed up Popoy Caritativo with calls and text messages to get his client's reaction to the statements made by the PEP source. At press time, Popoy has not responded.

"Yes, it's true. Jen nd dennis broke off last mar 5. It is unfortunate but it can happen to anyone. Jen is heartbroken but she knows she has to move on, not only for herself but also for jazz's [her son] sake. She could use ol d support nd understanding she needs. She's still trying to cope up wid d pain she is going thru and needs time alone. She's hoping to work at d soonest possible time as this will help her forget"