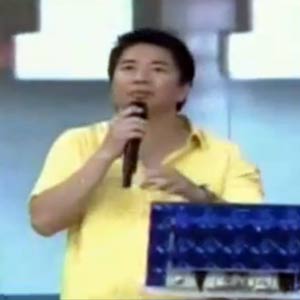 Willie Revillame interviews a six-year-old contestant during the March 12 episode of Willing Willie. This particular segment of the TV5 variety primetime program prompted varied reactions from viewers who perceived it as no less than "child abuse."

A live episode of TV5's Willing Willie has sparked outrage and re-ignited a hate campaign against the program's host, Willie Revillame.

The March 12 episode of the primetime variety and game show featured a six-year-old boy performing a sexy dance multiple times, to the amusement of the studio audience. (CLICK HERE to watch the video.)

In Willie's words, the kid is acting like a "macho dancer"—or in local parlance, a male prostitute.

The name of the kid is Jan-Jan. His aunt, Jocelyn, accompanied him to Willing Willie's Novaliches studio.

This segment of the episode has been uploaded on YouTube, a video-sharing website, where it attracted a number of viewers. At press time, the video has been viewed 291,889 times.

Many video viewers have posted comments. The majority have commented that the segment was "done in poor taste." A number of others have gone so far as to call it "child abuse." There have been many posts of hurtful name-calling. The viewers who placed blame zeroed in on Willie and the boy's parents.

A few entertainment personalities have already weighed in with their opinions—including Lea Salonga, Jim Paredes, Bianca Gonzales, and Kat de Castro. All of them have said that the incident is nothing short of "child abuse."

TALENT PORTION. Willing Willie is a primetime variety and game show on TV5, aired Mondays to Saturdays. It carries a number of games that aims to amuse the audience and to send them home with attractive amounts of cash.

The main segment is called "Wiltime Bigtime." It pits six contestants with each other, each fitting a chosen theme for the day. The themes determine the set of contestants for the day, and can range from housewives to kids to soldiers to jobless men.

"Wiltime Bigtime" has two rounds: the elimination round "Kantanong" and the jackpot round "Spin a Wil."

Willie introduces the contestants one-by-one during "Kantanong." He also interviews all of them, with the end goal of having them reveal the story of their lives. The contestants are quite willing to share a great deal, too.

The contestants are also asked to show off a talent, which will earn them a cash reward. Willie decides how much money he will give a contestant, depending on the talent shown, crowd approval, and the host's own taste. Talents to be demonstrated can be anything: singing, dancing, acting, or even reciting a poem.

WILTIME BIGTIME. A boy called Jan-Jan was one of the contestants in the March 12 edition of "Wiltime Bigtime." All of the six contestants were children.

[Under this subhead, PEP summarizes the contents of the video from YouTube. The ten-minute video has been edited to include only segments featuring Jan-Jan.]

The small boy carried a blank face when he was called to the microphone. This prompted Willie to call Bonel Balingit, a formal basketball player, from the audience. The tall Bonel then stood beside the short Jan-Jan while Willie said, "Ano Jan? Suntukan, gusto mo? Parang naghahamon ka ng away!"

Willie then laughed and asked a high-five from the kid, which Jan-Jan gave easily.

Willie then permitted Jan-Jan to say his greetings. What the kid said elicited huge laughs from Willie and the audience. The kid, however, did not laugh. His face remained as it was-serious, with a tinge of sadness.

Willie then asked him who his favorite singer was, to which the kid replied, "Di po ako kakanta." Jan-Jan smiled a little when this answer led the audience to laugh again.

Jan-Jan then introduced his aunt, Jocelyn, who accompanied him to the studio. He told Willie that his mother could not come to the set because she just gave birth.

Willie then gave her P3,000 pesos. He then asked the kid to give messages to his aunt and father.

Throughout, Jan-Jan had a face that seemed always on the verge of sadness. Or even of crying.

JAN-JAN DANCES. Jan-Jan then walked to the center of the stage to perform his dance talent.

Willie and the whole studio audience immediately reacted with boisterous laughter when Jan-Jan started to do sexy dancing to the song "The Next Episode" by Dr. Dre and Snoop Dogg.

The dance move is basically composed of repeated humping moves, while the hands are placed behind the head, or stretched at a diagonal beside the body. This is the way male dancers in gay clubs often perform.

The crowd cheered and clapped as Jan-Jan performed his dance for 55 seconds. But the boy had tears in his eyes.

Willie then faced the boy and told him, "Pinahanga mo ako, Jan-Jan!"

At this point, Willie asked his staff to play the music again, to prompt Jan-Jan to dance once more. Willie then performed the dance move with Jan-Jan for 20 seconds. Then Jan-Jan showed off a new dance move—he held a standing studio prop with one hand while continuing to do humping moves.

This sent Willie and the entire audience in stitches again. But the boy did not smile throughout the whole number. The audience continued to clap and cheer.

Willie was referring to Burlesk Queen, a film by Celso Ad Castillo in the '70s where the female lead, played by Vilma Santos, is forced by circumstances to perform a sexy dance in a glamorized bikini before a male audience.

Willie then hummed the first notes of "The Next Episode," and shouted "Hit it!"

The song then played again and Jan-Jan danced again for 15 seconds.

After this, Willie playfully dragged a red chair towards Jan-Jan. "The Next Episode" started playing again, and Willie acted like he was about to dance. However, he waved his arms and shouted, "Hindi ko kaya."

Then the music started playing again, while Willie and Jan-Jan danced the same way, this time for six seconds.

Finally, after four dances, the "Kantanong" segment started. A kid named Ella beat Jan-Jan in this round, which means he would not advance to the next round.

The crowd cheered as "The Next Episode" played again, and the boy started to dance again, now for 14 seconds. Jan-Jan was seen crying while doing the sexy dance a fifth time.

Before Willing Willie ended, Willie cooked up another segment featuring Jan-Jan. The boy was placed on a rising platform in the middle of the stage while Willing Willie's in-house dancers and co-hosts fawned all over him.

Many commenters said the child has been "exploited" because of the incident. Many also blamed Willie and Jan-Jan's parents, saying they "forced" the child to do the sexy dance to get money from the show.

User martahsants said, "I am in the opinion that the parents of the child is of more responsibility. Clearly, from JanJan's gestures, it can be inferred that he is forced to do it, or is pressured by the exposure for the sake of his parents' whims. However, the program, as imbibed with public interest,﻿ should have taken the necessary precautions that these kinds of child exposures could not have happened. This is a ghastly scene. Very disturbing."

User rickysfj89 quoted Republic Act No. 7610 or "AN ACT PROVIDING FOR STRONGER DETERRENCE AND SPECIAL PROTECTION AGAINST CHILD ABUSE, EXPLOITATION AND DISCRIMINATION, AND FOR OTHER PURPOSES."

"Under Republic Act No. 7610, also known as 'Special Protection of Children Against﻿ Abuse, Exploitation and Discrimination Act', the term 'child abuse' includes the following acts: 'psychological and physical abuse, neglect, cruelty, sexual abuse and emotional maltreatment,' and 'any act by deeds or words which debases, degrades or demeans the intrinsic worth and dignity of the child as a human being.' THATs ALL I can say, some may say the child wasnt forced by words but by act, he was. wake up!" said rickysfj89.

User alicebeckam said, "I have two feelings: pity and fury. Pity for Jan jan, whose future might be ruined because of this. Fury, for the people who refuse to see that a host dared to humiliate a child this way, and for those who are amused by this. Hindi naman sa OA or nabaguhan ako﻿ - pero parang manok lang siya pang sabong, para sa kaligayahan ng mga tao at﻿ para makakuha ng pera. Ganun na ba talaga ka baba ang tingin ng mga Pilipino sa ating sarili?!"

MISUNDERSTOOD. There are also several YouTube users who don't see anything controversial about the video.

Some of them believe that Jan-Jan's dance is a normal talent, and that there is nothing wrong about what he chose to perform. Many also say that YouTube users complaining about this are the very same ones who were against Willie from the start.

Willie, it will be noted, is a celebrity who polarizes Filipinos. He is either loved and revered or hated and reviled. Some pray for his success and good health; others want him written off the face of television.

There are even groups and campaigns in Facebook that unabashedly express their disdain for the TV host. The Facebook page "LET WILLIE REVILLAME RESIGN ON ABS-CBN!!!" reportedly has 406,115 members at press time. The page is active, and the last entry was posted yesterday, March 27.

Hate for Willie was fueled by several incidents, the earliest being his outburst on television on August 3, 2009, on his former noontime show Wowowee. In this incident, Willie criticized ABS-CBN's inserted footage of former President Cory Aquino's funeral during his live program. Willie has since explained that what he objected to was the network's decision to air his game show while airing scenes from the funeral, saying he found it upsetting and disrespectful of the former president. He also said he had earlier told management that he was willing to give his hours to the funeral coverage but that management said it could not earn a centavo if that were the case. Still, the incident went down as Willie feeling bigger than Cory and ABS-CBN. (CLICK HERE to read related story.)

"i dont see anything﻿ wrong with this video!" said phillin24.

LATEST UPDATES. This afternoon, the Movie and Television Classification Board (MTRCB) released its statement on the incident. Underlining the Board's duty to protect the rights of children, the MTRCB statement says in full:

"BRIEFER ON "WILING WILLIE" REGARDING COMPLAINTS OF CHILD ABUSE

"The Board received numerous complaints about the 12 March 2011 episode of 'Willing Willie' aired over Kapatid Network TV5 where a six-year old boy contestant was shown to be gyrating and impersonating the body movements of a macho dancer.

"In accordance with the Board's duty to enforce the Constitutional mandate that the State shall defend the rights of children from all forms of neglect, abuse, cruelty, exploitation, and other conditions prejudicial to their development, the Board has referred the matter to the Hearing and Adjudication Committee for appropriate disposition.

On the other hand, Department of Social Welfare and Development (DSWD) Secretary Dinky Soliman has sent a statement to Yahoo! OMG! Philippines. Soliman said she will write a letter to TV5 to ask them not to include children in the show.

"I will write a letter of protest to Channel 5 (and) to Mr. Manny Pangilinan regarding the case and we should all write him and demand that children should not be part of the show. They should not be used as instrument for enjoyment and to be laughed at. I will send the communication today."

PEP is open to publishing the statements of the figures mentioned in, and affected by, this article.