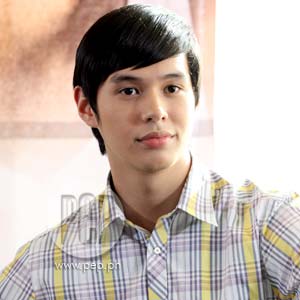 Young actor AJ Perez was killed in a vehicular accident at around 12 midnight today, April 17. He was on his way home from a show in Dagupan, Pangasinan, when their van was hit by a bus and a truck in Moncada, Tarlac.

In the April 2011 issue of YES! magazine, AJ Perez was included on its list of "The Next Big Thing"— artists who the network executives think would be the big stars in the next three years.

The Kapamilya bosses were made to list their Top 12 names, without ranking them. AJ was one of ABS-CBN's bets for stardom.

THE YES! ARTICLE. Following is the full write-up of YES! about AJ:

AJ Perez entered the scene quietly. A bit too quietly. If you ask Mr. M [Johnny Manahan]. His lines in his early movies (among them Kasal, Kasali, Kasalo and Sakal, Sakali, Saklolo) ended up on the cutting-room floor. The Star Magic chairman emeritus recalls watching those movies and thinking: "Two or three movies, wala siyang linya. Wala siyang linya! I'm waiting for one line. 'Please, Lord, give him one line.' Wala."

And yet, there it is, inscribed in a phrase above AJ's full-page photograph in the 2010 Star Magic catalogue: "The One Who Is Next In Line."

Launched as part of the Star Magic Batch 13 in 2006, AJ has bided his time, doing guest stints in weekly drama shows like Star Magic Presents Abt Ur Luv and Your Song Presents Underage, or showcasing his dance moves as part of the Gigger Boys in the Sunday variety show ASAP. Until last year, he had yet to commit to any major teleserye. A senior high-school student at De La Salle Greenhills, AJ continues to give priority to his studies—and any work taking him out of school premises three days a week just has to wait.

This is the major reason, theorizes business unit head Deo Endrinal, why the boy has yet to make a dent in the consciousness of the public. Still, anyone who saw AJ's aggressive turn as a brash neophyte who has to spend a night in the morgue as part of a hazing ritual, in one episode of the horror anthology movie Cinco, would be hard-pressed to deny that AJ's magnetism almost overwhelmed his hapless co-actors.

That dedication is even manifest in his exercise regimen, as AJ has put in gym time to turn his once-lanky frame into a manlier body. Slowly, the boy-next-door features are metamorphosing into chiseled, matinee-idol looks. The reason behind all this work on his physique? AJ took the big step of signing on with the nightly soap Sabel as one of the male leads.

Deo says he persuaded the budding heartthrob to sign on by admonishing him that he cannot keep letting opportunitues pass him by. "I told him, 'If you miss out on Sabel, I'm not sure if the next big opportunity will come your way!' He will have to juggle senior high school with Sabel—and that's hard."

But Mr. M is confident that AJ will handle the pressure just fine. "If he gets the right breaks, he'd be like a Rico Yan." We'll stand in line for that.

Thus went the gist of the YES! piece on AJ.

It was also in La Salle Greenhills where the wake of the the late Rico Yan was held in April 2002.

Just like Rico, AJ was a Star Magic talent and a La Sallista.