Willie Revillame changes mind, will no longer sue celebs who criticized him on Twitter 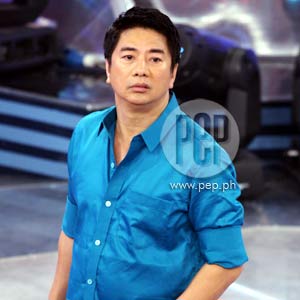 This was controversial TV host Willie Revillame's reply when asked in a radio interview if he was pursuing his threat to sue the celebrities who "attacked" him on Twitter.

A number of well-known entertainment personalities posted tweets saying they were incensed by the March 12 episode of Willie's game-and-variety show on TV5, Willing Willie, where a six-year-old boy danced to a "macho-dance" routine and was sent home with P10,000.

Willie made this comment in an interview with dzIQ (Radyo Inquirer) anchors Mon Tulfo and Reysie Amado last Friday, April 15.

However, Willie did not say why he was no longer pursuing the suit.

TV5 BACKS UP WILLIE. The TV host also thanked the management of TV5 for backing him in this controversy. (CLICK HERE to read related story.)

Willie was referring to the six-year-old contestant, Jan-Jan Suan, and his parents, Jojo and Diana.

He said that Jojo Suan has had to close his beauty parlor, which was the source of his livelihood.

Willie also said that what happened on his show was all just for fun and there was no malice involved.

As for the criticisms, Willie said he is not hurt by them.

Willie also hinted that these attacks might have something to do with his ongoing case with his former home network, ABS-CBN.

Ricky Carandang is a former anchor and correspondent of ANC, ABS-CBN's news channel. He is now part of President Noynoy Aquino's communications team as a spokesperson.

DR. CARANDANG DENIES ALLEGATIONS. For her part, Dr. Carandang has issued a statement denying allegations that she is part of a conspiracy to attack Willie.

She said that she was only expressing her opinion, which was solicited by the Commission on Human Rights (CHR) and the Movie and Television Review and Classification Board (MTRCB), when she spoke about the treatment Jan-Jan received on Willie's show.

“In recent days, it has been insinuated by the lawyers of Revillame that I am part of some grand conspiracy to 'bring down' Revillame and his TV program.

"This is simply not true. I merely expressed an opinion as solicited by the CHR and the MTRCB,” she said.

Speaking of her credentials, Carandang said that in her more than 30 years as a practicing professional, she has worked with groups such as Unicef, Ausaid, International Labor Organization, Rockefeller Foundation, ABS-CBN Foundation, and the Center of Excellence in Public Elementary Education.

She added, “The actions I take are mine and are shared by the members of the MLAC Institute for Children and Families. Our main mission is to uphold the dignity of the Filipino child and to advocate for truth-telling."

Carandang also pointed out that she has been working pro-bono with the Department of Social Welfare and Development for several years. She said she has provided counseling to victims of disaster, violent crimes, sexual abuse, and people with other problems.

As for her letter to the MTRCB on April 3, she said that she sent this upon the agency's request to get her sentiments on the boy's experience.

“It is my belief, as a clinical psychologist, parent, and TV viewer that the treatment of that child on the program was indeed a form of abuse. It is a view that is apparently shared by a significant number of people both here and now abroad,” Dr. Carandang said.

NO HAND. Meanwhile, ABS-CBN issued a statement saying that it has "no hand" in the latest Willing Willie controversy.

The network, through its Corporate Communications Department, denounced the “incredible” allegation as a “general accusation bereft of any details and is obviously meant to divert the issue by dragging ABS-CBN's name.”

It added, "We categorically deny that ABS-CBN has anything to do with the Jan-Jan episode. Records speak for itself. We are not a complainant in this case, and have not made any public statement about it.

“Indeed, it is incredible that ABS-CBN, as insinuated by Atty. Leonard De Vera [Willie's legal counsel], can possibly have control over the countless groups and individuals who have expressed their indignation over the issue, including Facebook, Twitter, major advertisers, government bodies, the church, academic communities, among others."

Willing Willie is currently off-the-air and will return after the Holy Week.