ON THE SET: Temptation Island beauties sizzle on the sands of Paoay, Ilocos Norte 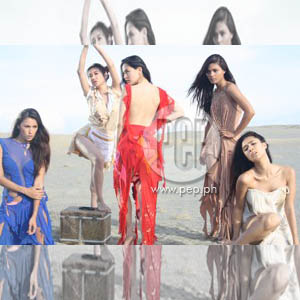 (From left) Solenn Heussaff, Rufa Mae Quinto, Marian Rivera, Lovi Poe, and Heart Evangelista pose for one of the scenes of Temptation Island. This scene was taken at the sand dunes of Paoay, Ilocos Norte yesterday, April 27.

As the golden sun sets on the sand dunes of Paoay, Ilocos Norte, five ladies strike poses and exude confidence despite their tattered gowns.

Later on, the same women are seen running across the hot sand screaming and chasing after their object of affection: a giant chicken.

On Temptation Island, anything is possible.

Aljur Abrenica, Tom Rodriguez, and Mikael Daez will provide eye candy as the leading men of the sexy ladies.

First released in 1980, the original film was directed by the late Joey Gosiengfiao and starred beauty queens.

This 2011, Chris Martinez directs a contemporary version of the movie, which will now feature aspiring supermodels.

Marian will reprise the role of a con artist originally portrayed by Azenith Briones, while Solenn will portray the social climber originally played by Bambi Arambulo.

Aljur is cast as Alfred (originally played by the late Alfie Anido), a suitor of Heart's character; Tom plays a waiter named Umberto (portrayed in the original film by Domingo Sabado); while Mikael plays a photographer named Ricardo (first played by the late Ricky Belmonte).

John "Sweet" Lapus brings life to Joshua, the boyfriend of Mikael's character but eventually Mikael becomes the love interest of Solenn's character. His role was portrayed by Jonas Sebastian.

Sweet is an avowed fan of the original Temptation Island. In fact, he played Azenith Briones (now played by Marian Rivera) in the all-male theatrical version of the film staged in 2003.

INTERVIEW WITH THE PRESS. After enduring the heat and humidity at the sand dunes, the stars retreat to the Playa Tropical resort in Currimao to rest and recharge for their grueling scenes.

PEP (Philippine Entertainment Portal) and select members of the press had the chance to interview the stars during this three-day set visit to Ilocos Norte.

Since they portray models who are competing against each other in this movie, do the stars also feel that there is competition among them in real life?

Marian explains why she had a difficult time reprising the role of Azenith in this movie.

For her part, Heart said that getting the role of Dina Bonnevie was "perfect" for her.

"It was so hard for me in the beginning when I couldn't do, what they were asking me to do.

"I felt so bad because I really wanted to be part of this movie.

"But then, I didn't want to compromise the movie because of things na hindi ko kayang gawin.

"But I guess it was really for me because they gave me the virgin role, which for me is perfect," she said with a smile.

Did she consult her boyfriend, Daniel Matsunaga, before accepting this role?

"When I told him that I was gonna have Serafina's role, he told me, 'Really babe, you can really do it?'

"Kasi nga kilala niya ako, but then he was really excited for me coz we're going to be featured in high-fashion magazines for the movie, so na-excite naman din siya para sa akin."

One of Lovi's major scenes in the movie is her "seduction scene" with Aljur Abrenica.

"Sa movies ko lang siya puwede gawin [seduction]. I kept thinking that it was for the movie at ikagaganda ng movie," she said.

Solenn was very candid as she talked about her kissing scene with Mikael Daez.

"Fun naman, I like to kiss him. Wala akong problema diyan."

Did they also shoot a love scene for the movie?

Is she used to doing rough scenes like that?

The Fil-French actress revealed that she and Mikael were both curious about the same thing for their first kissing scene.

Throughout the shooting period in the sand dunes, Rufa Mae had to carry around a makeup case as she trailed behind Lovi. Rufa Mae reprises the maid role originally played by Deborah Sun in the movie.

Temptation Island is slated to be shown in cinemas by the second week of June.