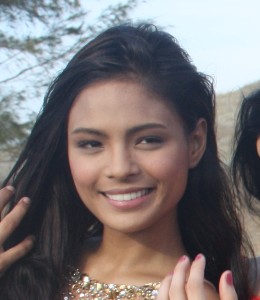 While shooting Temptation Island in Ilocos Norte, Lovi Poe (in photo) and her co-stars experienced working as a sandstorm swirled around them. She recounted: "It was really, really hard. Sobrang sakit sa balat. Nakatakip lang kami ng kumot."

Last Holy Week, PEP contributor Gorgy Rula reported that ex-couple Lovi Poe and Jolo Revilla were both in Boracay but that they were with different groups.

Lovi was vacationing with other Captain Barbell stars, while Jolo spent his vacation with his family. (CLICK HERE to read related article.)

It was a different scenario from their 2009 Holy Week vacation when Lovi spent her vacation in Boracay with the Revillas.

When asked about her encounter with Jolo in Boracay this year, Lovi evaded the question by saying, "Ayaw ni Tito Leo." She was referring to Leo Dominguez, her manager who was seated nearby.

But Lovi did say, "I got to hang out with them, his siblings."

She then said, her voice soft, "Na-close na namin ang chapter na yun, there's no need to go back."

When asked if she was entertaining suitors right now, she replied by saying, "Wala e, nagkataon lang wala. Walang time, no time for it."


They will portray contestants in the Manila Sunshine Super Model Search who will get stranded on an island.

Will the stars try to outshine each other in this movie?

Lovi is cast as Serafina, a very rich girl who bullies around her maid, portrayed by Rufa Mae Quinto.

How did she prepare for this role?

"It's not really that far from me... Just kidding! I know a lot of people like that," she joked.

One of the most difficult scenes they had to do was shoot in the sand dunes of Ilocos Norte during a sandstorm.

The stars and the crew members continued to shoot even when the winds whipped around them and the sand swirled around.

Aside from the ladies, Lovi also gets to work with hunk actors Aljur Abrenica, Tom Rodriguez, and Mikael Daez in this movie.

John "Sweet" Lapus is also part of the film as the social butterfly.

Lovi will have an intimate scene with Aljur.

In a separate interview with Aljur Abrenica, he said that Lovi was very effective in the seduction scene they shot.

When she heard about his comment, Lovi quipped about the seduction: "Well, sa movie ko lang siya kayang gawin!"

Since her character is dubbed as a "bitch," Lovi reveals that she will have catfights and confrontation scenes with all of stranded castaways in the island.

MY NEIGHBOR'S WIFE. Lovi will also have a sexy role in the upcoming Regal movie titled My Neighbor's Wife.

She is cast as the wife of Dennis Trillo, while the other pair in the movie is composed of Jake Cuenca and Carla Abellana.