Cherry Pie Picache on settling down and getting married: "It's a fervent prayer." 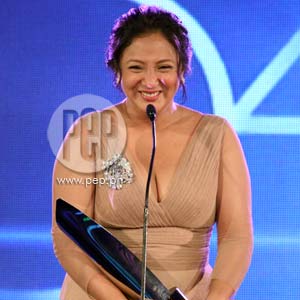 Cherry Pie explains why her role in Isda is close to her heart: "Ito yung first [major indie role] ko after two years. Plus, this is very personal to me kasi it's about motherhood."

Isda is competing against three other films by directors Auraeus Solito, Jeffrey Jeturian and Joel Lamangan.

Cherry Pie told PEP.ph (Philippine Entertainment Portal) why her role in Isda is close to her heart: "First of all, this is very memorable to me because after Foster Child (an indie film she starred in and that won in the Prix de la Fiction at the 2007 Festival International du Film d'Environnement in Paris, France), I haven't really done any independent film, aside from a few instances in support of yung ibang friends making indies.

"Pero yung major na very very good role na medyo to die for, ito yung first [major indie role] ko after two years. Plus, this is very personal to me kasi it's about motherhood," she said.

In Isda, Cherry Pie plays the role of Lina, a woman who gives birth to a fish. She is ridiculed by her community for it, including her own husband. Despite everything else, she loves the fish unconditionally, like it was a human child.

In real life, Cherry Pie is a devoted mother to her son, Nio. The actress recently broke up with her partner Gary Tria, Nio's father.

How is she coping with the separation?

"But, siguro ganun lang talaga, it wasn't meant [to last]."

She said she was able to adjust, thanks to the support of her family and friends, most especially her son, Nio.

Cherry Pie also shared her current status with her ex. "We're parents to our son. We're very good friends now. I love him and his family dearly. Wala namang [animosity], but yun lang, we're not together [anymore]."

Both Cherry Pie and Gary are still single. They have also been seen together in public. Is a reconciliation possible?

Any plans of settling down and getting married?

"Hindi ko na iniisip. It's a fervent prayer, of course, siyempre you want to grow old din with someone kasi ang mga bata lalaki din at mag-aasawa and will have their own family.

Is she seeing anyone?

Could she and Gary still end up together?