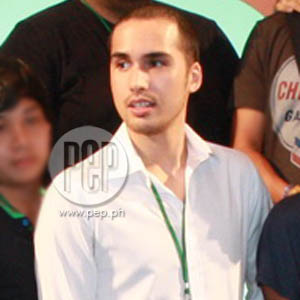 Young filmmaker Rafael Santos is now in hot water after his comments about theater actors in an interview.

A video posted by a certain Jeff Hernandez has sparked ill remarks from theater actors, directors, and other industry players.

The video was a recording of a TV interview of young filmmaker Rafael Santos on the show Cityscape,which aired last June 24 on the ABS-CBN News Channel (ANC).

Santos's film Samarito is competing in this year's Cinemalaya Film Festival under the short films category.

Samarito is about a robber who gets caught in an awkward and critical situation that would test his conscience and temperament.

In the interview, host Lexi Schulze asked Santos this question: "You also used theater actors for your film, is it usually the case when you do shorts or independents, do you usually get theater actors and not some of the big names in the industry?"

This was Santos's reply: "Ah, well, personally, I find the theater actors are better to work with because they don't complain; you can feed them Sky Flakes three meals a day, and pay them in cat food basically..."

"Because they usually do it for free a lot of the time," Schulze interjected.

"And they're never late, and they cry when you want them to cry, other actors kasi you have to hit them first..." Santos continued.

"VIOLENT" REACTIONS. Santos's remarks irked many actors and directors who watched the video.

These are some of the comments that PEP.ph (Philippine Entertainment Portal) saw posted on Facebook and Twitter:

Award-winning director and writer Joey Reyes said this on Facebook: "OMG!!! I do not, can not and refuse to believe this. The INTEGRITY OF THEATER ACTORS is not measured by their capacity for subservience. IT IS CALLED LOVE FOR THE ART AND CRAFT. It is called PROFESSIONALISM. I am so HURT by such careless statements."

In reply to a certain Direk Pablo, top comedienne Eugene Domingo—who began her acting career in theater—also made this comment on Facebook: "If you know him personally, advise him well. sayang baka walang manuod ng trabaho niya dahil lang sa ayaw niyang mag apologize. obviously WE ARE OFFENDED. taga theatre ka man o hindi. THIS IS NOT FUNNY NOR PETTY. THIS IS PAINFUL. DO NOT GENERALIZE. BE MORE SENSITIVE. PLEASE."

Actor and makeup artist Ricci Chan, who starred in the hit stageplay Care Divas, posted this on Twitter: "Naku, Rafael Santos, you arrogant fool. Making a punchline out of Theatre Actors is the worst thing you could have done in your life."

Ricci also commented on Facebook after it was mentioned that Santos, apparently, is the son of formidable lawyer Katrina Legarda.

Actress Kalila Aguilos also had this to say: "...Very bad choice of words. He was making a statement about commercial actors being difficult but dragged "theatre actor" through the mud in the process. He needs to publicly apologize and explain himself."

Actress G Tongi also gave her point of view on the matter on Facebook. She wrote: "I think that he was trying to make a point that artistas have high demands.. he just went way too overboard. Pero what do you expect? Bagets pa kase and this is his first film.. tsk tsk tsk. Sayang but maybe he was trying to be controversial noh?"

She also added, "Oh I agree he is way out of line. I am not justifying his actions. I am trying to give reasons why he could be so stupid enough to say these things. gets?"

Emerson Reyes, a young director who is also competing in the 2011 Cinemalaya Film Festival short film category gave this exclusive statement to PEP via text message:

"I'm with Rafa sa Cinemalaya Shorts A program. And I think his statement is really offensive to theater actors.

PEP.ph (Philippine Entertainment Portal) is open for any statements from Rafael Santos regarding this issue, although a source says the young filmmaker will not apologize since his statement was "taken out of context."