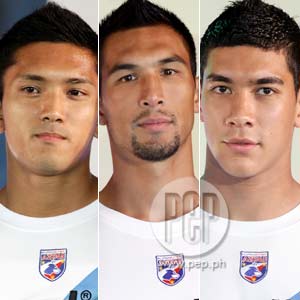 Azkals members (from left) Jason Sabio, Anton del Rosario, and Simon Greatwich (not in photo) deny rape accusations against them, which include goal keeper Neil Etheridge (right). According to a report, the football players allegedly abused a Filipino woman in the house of their team manager, Dan Palami. However, Jason defended the team in an interview with ABS-CBN News, "I've heard a lot of rumors and speculations, that this person (Paul Weiler, Philippine F

Rumor has been circulating that four members of the national football team, Philippine Azkals, were involved in a "rape" incident.

The information contained an unconfirmed e-mail report from Paul Weiler, who introduced himself as a former consultant of the Philippine Football Federation (PFF). He related the incident to a reporter who wanted to confirm the rumor.

Weiler is a German football coach.

In the e-mail, Weiler wrote (published as is):

"Players Anton del Rosario, Jason Sabio and especially Simon Greatwich were involved and recorded the incident also via video cam (Jason Sabio was the one holding camera). Neil Etheridge and his very best friend Simon Greatwich did rape the woman and it seems happened in a villa/house of general manager Dan Palami (who seems not know about what happened in his house and was not there). 'Master mind' of this sex violence idea seems Anton del Rosario .. so far I know he did not rape the woman but pushed the others to do it."

Weiler also claimed that his intention was to warn the authorities about the issue.

(Published as is) "I can not live w/ the hard facts that players raped a young Manila woman and that it will be 'okay' for everybody. I have the fear that this players (if no punishment happens) they will do it again and maybe serious Azkals players are also pressured by them.

"Luckily its from my point of view a very small group of the Azkals and the more as 90% of azkals players are very serious and have no intension to do such violent behaviours. I like the Azkals furtheron .. but it would be very piTy and unhealthy for the whole NT if such players can escape from their bad styles easily."

Weiler also reiterated, "For me it's very important that the issue handles careful and that unguilty players and the Azkals reputation will be not touched to much negative."

PEP tried to get in touch with Weiler through his Facebook account. However, the German coach still has not replied to our private message at press time.

AZKALS DENY ALLEGATIONS. Meanwhile, in a report published on ABS-CBN News website, the Azkals who were implicated in this controversy denied the allegations.

Jason Sabio said, "I've heard a lot of rumors and speculations, that this person (Weiler) is trying to get back at the team because we had a fallout while we were in Germany.

"I don't know the full story, they're all just rumors."

Simon Greatwich, on the other hand, is disappointed that people are trying to bring the team down.

In PEP's recent interview with Anton del Rosario, he said that their management is currently investigating the issue.

Meanwhile, team manager Dan Palami said in an interview with GMA News, "I can't take action if the only basis is the Internet. It's unfortunate that the boys have to face a controversy like this, but our main focus remains on our game versus Kuwait."

The PHL Azkals will leave the country on July 14 for Bahrain, where they will have a one-week training prior to the first leg of their match against Kuwait on July 23.

PEP is open to publish the reactions of all the personalities implicated on this issue.