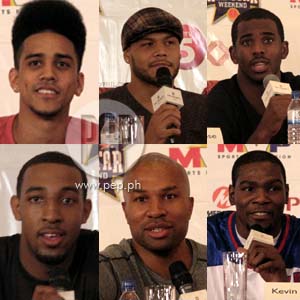 (L-R, top to bottom) Gabe Norwood and Sol Mercado and other teammates from the PBA selection will go head-to-head with NBA superstars Chris Paul, Derrick Williams, Derek Fisher and Kevin Durant in a friendly game at the Araneta Coliseum tonight, July 23 at 7:00 p.m.

Coach Toroman said the friendly game will help prepare the national team for the 2012 London Olympic qualifiers in September.

In a previous interview with PEP.ph (Philippine Entertainment Portal), Smart Gilas Team Captain Chris Tiu said he is looking forward to playing with people from different countries to get first-hand experience of various basketball techniques.

As for Norwood and Mercado, they said they are just happy to play in the same court with their basketball idols.

Mercado said he has been dreaming of this match for days and has taken to his favorite Playstation game NBA 2K11 trying out various strategies.

Norwood, on the other hand, hopes to win the game against his idols, because "you don't play this game just to lose," he said.

The two athletes said they also hope to learn a lot from their professional opponents.

At the press conference held earlier at the Isla Ballroom of the EDSA Shangri-La hotel, Fisher, Durant, Williams and Paul said since they arrived in the country yesterday, they have been overwhelmed with the support and hospitality shown by Filipino fans.

They are very excited to play and are happy to be part of the Manny V. Pangilinan Sports Foundation's efforts to raise funds for the advancement of basketball and other sports in the Philippines.

Most of them are also excited to meet world boxing champion Manny Pacquiao.

Bryant, Rose, McGee, Harden and Evans did not attend the lunchtime press conference opting to rest for the upcoming games.

Earlier today, the players facilitated a basketball clinic for about 75 children, and later attended an exclusive meet and greet event at the Meralco head office in Ortigas to raise funds for the foundation.

Bryant a.k.a. the Black Mamba, will be the NBA team's playing coach.

A 3-point shootout event and dunk showcase will also be part of Sunday's activities.

The games will be aired on AKTV Sports on IBC Channel 13. Tonight's game will be aired live at 7:00 p.m. There is a delayed telecast on Sunday at 5:00 p.m. for the second game.