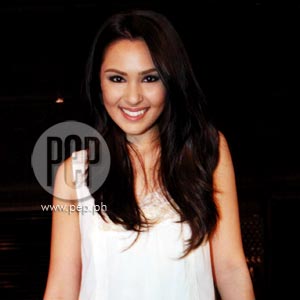 "I play a Filipina expat who works in a hotel; I'm half-American, half-Filipina," Gwen Zamora describes her role in the Indonesian-produced indie, The Witness. She says the film will open in the Philippines early next year.

Kapuso actress Gwen Zamora is out to prove that she is more than just a pretty face. She recently signed a contract for an independent-produced film in Indonesia titled The Witness.

"A couple of artists were presented and they chose me.

"I'm the witness, from the title, The Witness. I play a Filipina expat who works in a hotel; I'm half-American, half-Filipina."

"Opo, it should be out between January or March po. "

"Intense talaga, I didn't expect my role to be [that] powerful.

"All the stunts, I did [myself], so half of my shooting days, I had bruisies everywhere. My kneecap was sort of out for a while, so I was [in and out] of the hospital and I was always on painkillers so it was really intense talaga.

"Ibang-iba [itong] movie talaga compared sa ibang roles na nagawa ko. This is... madaming iyakan. Oh my God! A lot of crying, which you've never seen from me yet."

"It was really worth it!"