(UPDATED) Shalani Soledad now engaged to Pasig Rep. Roman Romulo; gets a diamond ring from him 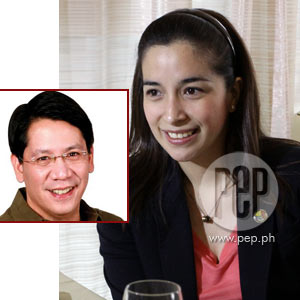 "He doesn't bring women to the house unless he is serious," says Agriculture Undersecretary Berna Romulo-Puyat after revealing that her brother, Pasig City Representative Roman Romulo, already introduced Shalani Soledad to their family. Shalani is currently dating the Pasig City congressman.

The announcement was made by Rep. Romulo in an interview with ABS-CBN.

Rep. Romulo proposed to Shalani at the Our Lady of Fatima church in Valenzuela City.

According to the lawmaker, they are eyeing to settle down next year.

Rep. Romulo also revealed that he first asked for Shalani's hand from her mother, Mrs. Evelyn Soledad, three weeks ago.

Mrs. Soledad said, "I admire the courage and honor of Rep. Roman Romulo in seeking me out and telling me his intentions with my daughter Shalani."

She added that she cried when Rep. Romulo personally went to her to ask permission to marry her 31-year-old daughter.

Puyat confirmed this in a chat with reporters during the budget hearing for her agency at the House of Representatives, Quezon City.

According to a PEP source, the diamond ring is an heirloom given by Rep. Romulo's mom, Rosie Lovely Tecson Romulo.

Based on a report by Lira Dalangin-Fernandez of News 5, Usec. Puyat also mentioned that Shalani is "well-liked" by the Romulo family.

The 44-year-old representative of the lone district of Pasig City has already introduced Shalani to his family, which only means that Rep. Romulo is serious about the former girlfriend of President Noynoy Aquino.

"He doesn't bring women to the house unless he is serious," Usec. Puyat told the media.

According to the report, Rep. Romulo regularly fetches the 31-year-old city councilor from TV5 Studio in Novaliches after every episode of Wil Time Bigtime.

They also go to Quiapo church together whenever they can, Usec. Puyat revealed.