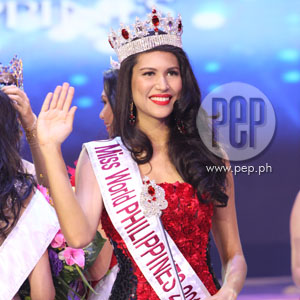 The 21-year-old Filipino-French bested 24 other candidates representing different parts of the country.

Aside from winning the title Miss World Philippines, Gwendolyn was also awarded Best In Swimsuit.

As the winner of Miss World Philippines, Gwendolyn won one million pesos cash prize, a condo unit, and other fabulous prizes.

Gwendolyn, who was a finalist at last year's Binibining Pilipinas, will also represent the Philippines in the 61st edition of the Miss World pageant to be held on November 6, 2011 in London.

Maria Paula, on the other hand, was adjudged Best in Long Gown.