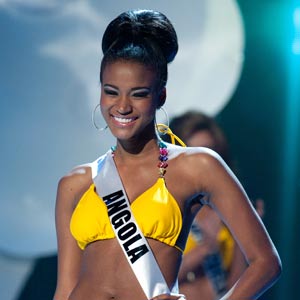 Barely two weeks after winning the Miss Universe 2011 crown, Miss Angola, Leila Lopes, finds herself in the midst of a broiling controversy.

The 25-year-old beauty queen has been accused of using fake documents to qualify for Miss Angola United Kingdom last year.

According to the Beauty Pageant News website, an Argentinian newspaper reported that Lopes forged documents to join the competition last October 2010.

This was said to be the qualifying contest for Lopes to officially represent Angola in the Miss Universe.

The documents allegedly showed her as a business management student at a British school making her an eligible candidate.

The forgery was reportedly done by a certain man named Charles Mukano, who was said to be responsible for organizing the competition.

Since the competition was for Angolan citizens living in the U.K., the Argentinian newspaper also stated that Lopes is not qualified to enter the Miss Universe pageant, according to the article published on entertainment site Metro Masti on September 18.

The report said, "The route that Leila Lopes took was that for Angolan citizens living in the United Kingdom where as the crowned Miss Universe model had never lived out of Angola."

If the accusation is true, the Miss Universe crown might be taken away from Lopes.

Meanwhile, Manila Bulletin reported on September 16 that the Miss Universe Organization told the AOL Latino that they do not know Mukano.

It also clarified that the organizer of the Miss Angola pageant is Renato Guttler.

Likewise, it denied the accusation of falsification of documents against Lopes, who is the first candidate from Angola to win the crown.