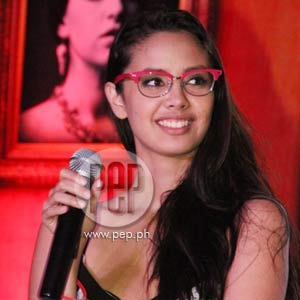 Given the chance to play a character in any scary movie, Megan Young says she'd rather do the haunting because, "I don't like being scared. I don't like having that eerie feeling." The lady attended Cinema One's Sine Sindak Halloween Outdoor Screening, which is now on its fourth year.

And in line with the event's theme, the Kapamilya actress was asked about her favorite horror films.

Megan recalled, "We were in a family friend's house, sobrang laki ng TV nila yung kita mo lahat. I was the oldest there at 12 years old!

"My brother, my sister Lauren, and other friends pa...super uso yung The Ring. The Ring wasn't that scary for us.

"But then, The Grudge, sobra kami natakot, as in kinikilabutan ako. I had to walk out. I couldn't sleep by myself for a week, doon ako kay mommy."

Why was it different?

"The Grudge was like nakadikit sa wall, ganoon yung pakiramdam ko and any moment, the little kid will just appear out of a corner. Yung feeling na andoon lang siya, nakatingin sa akin. I really couldn't watch it na."

Did she ever feel the same way when she read the book version?

"Pagdating kasi sa book, kahit nakakatakot, I'd want to read it. Kasi iba yung details, and even though you're super scared, you're so into it. Books have that force with me, they just draw me in."

Right now, she has Haunted on her reading list, but hasn't started on it, because she claims, "kasi nakakatakot siya."

Her favorite book of all time that she can't put down is Angels and Demons by Dan Brown.

"Always and forever. I read all his books. And it's always going to be Angels and Demons. He does have the same writing style for all of it, pero iba talaga yung pagkakuwento niya nun, e."

She recalled shooting a scene she had to do by herself for White House, a horror movie released by Regal Films, which required opening a door. Megan ended up being accompanied by the crew because she was becoming scared for real.

"Yung pakiramdam mo na your imagination becomes so creative when you're in a scary place. And things start happening in your mind."

HALLOWEEN. What are your plans this Halloween?

On that note, Megan would want to be a zombie. "But I think everyone is gonna be too busy with their own make-up. So, 'di na ako magpapa-make-up. I'll go with something simple like a chef, a cowgirl..."

CINEMA ONE MOVIE. From horror films, the topic shifted to the movies she had watched on Cinema One.

The one that touched her was Anak. "I really appreciate the movie. Set aside na natin the relations... her rebellious side. I was looking more at the connection nila ng mom niya. Kasi ako, my mom is in the States..."

She also mentioned One More Chance, which she watched a year and half after the movie came out as part of her preparations before working with John Lloyd Cruz and Bea Alonzo in Betty La Fea.

The Star Magic talent related how she and her friends have even used One More Chance movie lines when giving love advice. "Kapag may heartbroken, nag-quotable quotes kami, comforting each other with One More Chance."