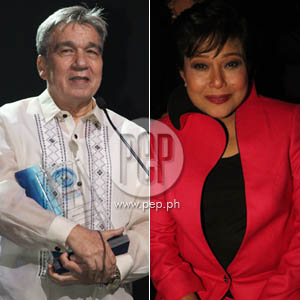 Director Mario O'Hara (left) and Superstar Nora Aunor (right) were given honorary awards at the Cinema One Originals 2011 for their pioneering efforts in the country's independent cinema.

Last night, November 13, was the awards night for the Cinema One Originals Digital Film Festival 2011, held at the Carlos Romulo Auditorium of RCBC Plaza, Makati City.

Aside from the awards for the filmmakers who submitted their entries in this year's festival (CLICK HERE to read related story), Cinema One added a new accolade: an honorary award for artists who pioneer efforts in the country's independent cinema.

The awardees for this year are multi-awarded film and television director Mario O'Hara, and renowned film actress Nora Aunor.

According to the official citation from Cinema One, both artists are pioneers in the Philippine indie scene.

Mario O'Hara is known as an actor, screenplay writer, and director.

His acting stints include Stardoom (1971) and Tinimbang Ka Ngunit Kulang (1974).

But it is Mario's low-budget independent film Babae sa Breakwater (2003) in 2003 that solidified his connection to indie cinema.

Babae sa Breakwater was screened at Cannes, as well as other film festivals.

This feat inspired other local indie filmmakers to submit their films to the major film fstivals abroad, gaining them a global audience.

But what might be surprising to many is that Nora not only acted in these movies; she also produced them.

Nora can then truly be called an indie artist.

"REMAIN INDEPENDENT." Direk Mario was the first to receive his citation.

In his speech, he expressed that he felt emotional watching the tribute video made for him, which was shown before he took the stage.

He said he felt this because he remembered all the people he worked with in the past, who already passed away.

"So siguro, kaya very emotional kasi you remember so many people, so many talents, and the people you worked with, and wala na sila," he said.

He then thanked the people around him who continue to inspire him to make good films.

Direk Mario also gave an advice to the young filmmakers in attendance.

SUPPORTING INDIE. Nora Aunor, on the other hand, gave a longer speech after receiving her citation.

She narrated to the audience how she became an actress, and explained what motivates her to make good movies.

She then told the audience how she was able to produce the movie Tatlong Taong Walang Diyos, which she also starred in.

She also thanked all the people who supported her, especially her fans who flocked to the venue of the awards so they can cheer for her.

UPDATE ON NORA. PEP had a brief interview with the Superstar after the event. Here, she expressed that she would like to support the indie movies of today.

She said the award inspired her to do so.

She also expressed that she is willing to work with the young filmmakers who has entries in this year's Cinema One Originals.

"May balak, may balak bago ako umalis," she said quickly.

Asked to explain what she meant by "umalis," Nora said it had something to do with her operation to get her voice back.

Nora Aunor's vocal cords were damaged last year due to an operation.