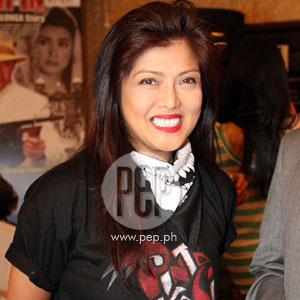 The woman who can take legitimate, if partial, credit for the internationally acclaimed films Himala and Oro Plata Mata wears her producer's hat anew.

Imee Marcos is behind the new-breed film, Pintakasi, which showcases the country's problems by tapping into hip hop as a medium.

The film also revives the famous works of national hero Jose Rizal, embellishing them with characters both real and computer generated.

The enthusiastic and affable Imee, speaking to PEP.ph (Philippine Entertainment Portal) at Mario's on Tomas Morato Avenue on December 14, describes the almost-three-year-in-the-making film as "napaka-challenging."

She adds, "There's not much animation. A lot of special effects, though."

How hands-on was she with Pintakasi?

Her answer: "I was kinda way too babad in this film. Hindi ako director-general, [di] katulad ng [sa] experimental cinemas."

Imee's title, during the making of Oro Plata Mata and Himala, was Director General of the Experimental Cinema of the Philippines (ECP), under whose wing several extraordinary films were made by a select number of producers and filmmakers.

In today's Pintakasi, she is recognized as the lone producer, although she has tapped funding agencies she does not name in the PEP interview: "I was so hands-on, na nakakaloka na hindi na kami natutulog.

The experience, she relates, is a far cry from producing the now-iconic Oro Plata Mata, directed by Peque Gallaga, and Himala, directed by Ishmael Bernal.

"Oh boy, I was spoiled then," she recounts frankly.

"They were big productions in the sense that marami akong nauutusan. Ngayon, medyo mahirap talaga.

"Although, at the end of the day, some will probably observe na lahat ng ginagawa ko, sakit ng ulo."

She recalls the hiccups she faced as ECP top boss.

Its lead star, Nora Aunor, she remembers, was "embroiled in these contract problems with two studios."

As director-general of the ECP, Imee had to make the problems go away. Of course, there was never a question that she could.

She was, after all, the daughter of Ferdinand E. Marcos, at the time the country's all-powerful President, who was then ruling, not by legitimate election, but by his self-proclaimed martial-law powers.

Himala got made. And the film, written by Ricky Lee, is bound to be in any decent poll of the 10 best Filipino films ever made. Already, in 2008, it was voted the Best Asian Film In History in a Viewers' Choice poll conducted by CNN.

ILOCOS NORTE ORIGINS. Imee is today governor of Ilocos Norte, where the Marcoses come from and where Ferdinand's embalmed body is preserved in an air-conditioned mausoleum in Batac.

The former President died on September 28, 1989, in Hawaii, U.S.A., where he had lived with his wife Imelda in exile, after being ousted from Malacañang by the 1986 People Power Revolution, otherwise known as Edsa 1.

In September 1972, when the Constitution forbade him from running for another term, Marcos declared martial law, changed the Constitution, got rid of the three co-equal branches of government, and set himself up as a virtual dictator.

He lifted martial law only in 1981, just before Pope John Paul II was due to visit the country. The visit of the supreme head of the Catholic church to the only Catholic country in Asia was expected to be a national and international event. (It was.)

And a President who ruled under martial rule was not going to earn high marks with the world community. This, Marcos critics said, was the only reason he officially lifted martial law, although all the executive orders and "laws" he had passed during his one-man rule remained.

Principally because of the conduct of martial rule—the eight-year rule was marked by widespread human rights violations and large-scale abuse of power—Ferdinand has not been granted a burial at the Libingan ng mga Bayani.

This is what Imee's family has been demanding of every government since their patriarch's body was returned to the country in 1993, arguing that a former president of the republic deserves to be buried at the national heroes' cemetery.

The Marcoses almost succeeded in this campaign during the time of President Joseph "Erap" Estrada, a known Marcos ally, but for the loud and sustained public outrage that greeted Erap's move.

Today, the sitting President, Benigno Aquino III, has been firm in saying no such burial is taking place: "Not on my watch."

Through the many twists and turns of politics, the Marcoses have today effected a high-profile political comeback.

Imee's mother, Imelda, is now in the House of Representatives, where her last known act was to vote against the impeachment of Chief Justice Renato Corona, in a move that clearly aligns her politically against PNoy.

Her brother Bongbong is now in the Senate, and is reported to have already set into motion his bid for the presidency in 2016, when his term as senator ends.

And Imee, herself a three-term congresswoman (1997 to 2007) of her province, is now its governor.

PRODUCERS WELCOME TO SHOOT IN ILOCOS NORTE. One project that Imee has been pushing as governor of Ilocos Norte is the promotion of the province's "very cinematic" spots.

But in addition to selling the magnificent range of Ilocos Norte's terrain, Imee has added real incentives: "We've done something in the province.

"Any filmmaker, including the ad agencies who are shooting commercials, anyone who shoots film in Ilocos Norte—gets a counter-parting na arrangement with the province.

"We will fund at least part of their expenses when they reach the province.

"We can actually help them, we'll be their location manager, basta mag-shoot sila sa Ilocos Norte."

The province, which is the site of the fabled beaches of Currimao and Pagudpud, the ancient Paoay Church, the impressive St. William's Cathedral and the Sinking Bell Tower, and the modern-day windmills by the seashore, to name a few, is not alien to movie projects.

The Hollywood movie Born on the Fourth of July andthe foreign-made TV series Shogun, plus the local movies Panday and Temptation Island (both the original and remake), are just some of the projects that have been shot on location in Ilocos Norte.

Governor Imee is hoping the strategy will boost the province's tourism industry, particularly because, she says, "We can't afford naman to pay for ads."

If she succeeds, she will put Ilocos Norte in the national limelight once again.