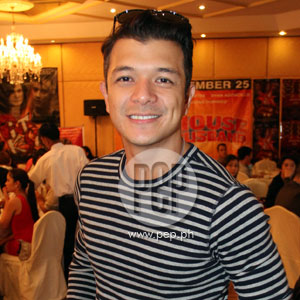 Jericho on his wish to star in an indie film and to venture in work behind the cameras: "Wala pa kong indies, so next year, gagawin ko yung first indie ko. I might be involved in the production also. It's very exciting for me ngayon kasi naghahanda talaga ko." In 2012, actor Jericho Rosales will make a comeback in film, with three projects slated under Star Cinema and three more for Regal Films. The actor also wants to dabble in independent filmmaking, wi

Before being cast in the Metro Manila Film Festival entry Yesterday Today Tomorrow, Jericho Rosales' face was not seen on the big screen for quite a while.

The actor's last local film, prior to the Regal Films, all-star cast drama Yesterday Today Tomorrow, was the KC-Gabby Concepcion starrer, I'll Be There.

Jericho also appeared in his first international film, Subject: I Love You, in April 2011. He played the character of a Filipino who authored the infamous "I Love You" virus, circa 2000.

At the press conference of Vantage Razors where he was launched as the brand's endorser, Jericho revealed to PEP.ph (Philippine Entertainment Portal) and other media that his plans for next year mainly have to do with film projects.

He says that according his talent manager, Angeli Valenciano of Genesis Entertainment, he is scheduled to work on three films under Star Cinema and another three for Regal Films.

"They said nga na they will support me with three movies.

"So blessing for me na sabi ng Star Cinema gagawa [ako] ng pelikula with them.

'And then there's an offer also sa Regal Films to do another film, bukod dito sa YTT [Yesterday Today Tomorrow], and then... three films also with Regal."

Apart from the mainstream film projects, the actor/model/singer sees himself working on independent films, too, in 2012.

ALAGWA. In the same press conference, Jericho talked about the details of his upcoming independent film project, Alagwa, which he intends to start working on in January 2012.

The actor intimates that Alagwa might also fulfill his longtime wish to be part of the production of a film.

"Since I've always wanted to be a part din naman of the filming—gusto kong mag-produce ng isang pelikula—hey gave me the opportunity to be a part of it.

Alagwa, written and directed by Ian Loreños, centers on the tale of a man and his child, a narrative that Jericho can relate with.

Ian Loreños, the Filipino-Chinese director, is known for his independent film, The Leaving, which bagged Best Cinematography and Best Production design in the Cinemalaya Film Festival of 2010.

Asked if this will mark his career as a film producer, Jericho smiles and expresses his delight, "Sana, sana. I want to make this one.