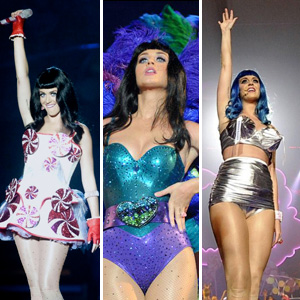 In her official Twitter account, Katy extended her appreciation to those who came to watch her California Dreams Tour concert. "Thanks for an AMAZING FINAL CDT date Manila! Sorry to keep u waiting earlier... had to solve a security issue, but THE SHOW WENT SPLENDIDLY!"

It's the American singer, songwriter, and actress's second time in the Philippines.

She first came to the Philippines last November 14, 2009, for her worldwide Hello Katy Tour also held at the same venue.

KATY'S "MANILA DREAMS." The concert was scheduled to start at 8 p.m. but a hitch delayed Katy's appearance to 10 p.m.

The delay was attributed to "security issue."

As the crowd were getting ready and anxious for Katy's apearance, a video presentation was shown at the backdrop screen as a prelude to the much-awaited concert.

The video seemed to have set the mood and theme of the concert, which depicted Katy waking up from a dream looking for her lost kitten.

It was at this point Katy appeared on stage wearing a white glittering dress with a red and white candy cane circles.

This startling appearance opened the concert as she sang her hit song "Teenage Dream" from her Teenage Dream album.

The opening number was followed by another hit song, "Humming Bird Heartbeat."

At the top of her voice, Katy greeted the audience with "Manila! Welcome to California Dreams Tour!"

This was followed by hit songs after hit songs: "Waking Up in Vegas," "Ur So Gay," and "Peacock" with the audience singing along with her in some songs.

Katy continued with the hit "I Kissed A Girl" adding "Oh Manila! Oh, oh Manila!" to the lyrics.

She also said, "Make some noise! Did I save the best for last?"

Katy called out a lucky boy from the audience to come up the stage on the condition that he be shirtless.

"Asking for thrilla boys out there!

"Manila boy out there, to come on stage now!"

A bedazzelled Ivan Dorschner, a former Pinoy Big Brother teen housemate, went up the stage, took his shirt off and got a kiss from Katy.

Ivan kissed her back!

More songs followed, including "I Kissed a Girl, "Circle the Drain," and "E. T."

Katy also belted her hits "Not Like The Movies" and her acoustic version of "The One That Got Away."

After another video intermission, and as Katy took a short break , her back-up singers and dancers sang and danced to the tune of "I Want Candy," "Milkshake," and "Tootsie Roll."

The crowd went wild again when Katy came back on stage, this time wearing a glittering blue dress and a blue wig followed by a quick costume change for her "Hot N Cold" song number.

"Manila! Make some noise! It's been really fun!

"So are you ready to sing my favorite song with me?" Katy asked her enthusiastic Filipino fans.

The crowd sang along with Katy's "Firework."

As if ending the show, the audience prodded Katy with "More! More! More! Katy!"

And she replied, "Manila! Make some noise!"

THE GRAND FINALE. For her grand finale, Katy Perry sang "California Gurls" with the audience singing along.

Katy ended her concert with, "Thanks for an amazing final CDT [California Dreams Tour] date Manila!

"Sorry to keep you waiting earlier...had to solve a security issue, but the show went splendidly!"