Carmina Villarroel denies walking out on Claudine Barretto in TVC shoot: "In my entire showbiz career... never ako nag-walk out." 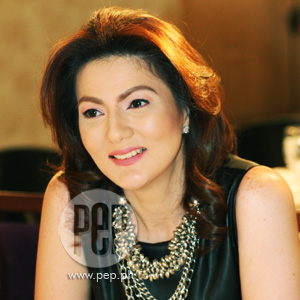 "Hindi kami magkaaway! Friends kami! So, hindi totoo. Kaya nga sabi ko nga, I have to speak up. I have to clear this up kasi she's not here to defend herself," actress and talk-show host Carmina Villarroel quickly denied that she walked out on her co-endorser Claudine Barretto. The alleged incident was reported in entertainment writer Dolly Anne Carvajal's column "Dollywood," published January 29, 2012.

Carmina Villarroel did not hesitate to address the incident that she walked out on actress Claudine Barretto during a shooting of a television commercial.

In entertainment writer Dolly Anne Carvajal's column for the Philippine Daily Inquirer, it was reported that the actress/TV host/endorser was "irked" by Claudine's "endless demands," and thus asked the crew to "pack-up."

Published on January 29, 2012, the column "Dollywood" recounted how Carmina, at first, purportedly conceded to a series of requests by Claudine.

"First, Claudine requested that she be given the bigger dressing room, which Carmina readily agreed to. Then Claud asked if, instead of Mina, she could be the one to wear the white long-sleeved shirt. Again, Mina did not object. Later, Claud said she needed a nap. That was fine with Mina, too. The clincher was when Claud asked to deliver the longer line in the commercial. That was the last straw; Mina walked out."

Carmina said no such incident occurred.

Carmina says she has not read the article herself.

"Kasi sinabi na parang may something daw kaming dalawa ni Clau and then nag-walk out ako.

"So, it's not true. So, hindi totoo. Hindi totoong may ganoong insidente."

CO-ENDORSERS. The last commercial that she and Claudine were in was for a milk product shot about two years ago, according to mother-actress Carmina.

Carmina adds that the endorsement has long ended because both their kids have already grown up.

"So Clau and I, we're friends. We're okay," she emphasizes.

The talk-show host also mentioned that, after the column appeared, she received nasty remarks on the social networking site Twitter.

"I had to explain my side sa Twitter because it's really not true.

Has she tried communicating with Claudine?

It perplexed her, she said, that such a conflict was even written, considering that she and Claudine had been handled by the same person for each of those television advertisements.

"Kaya nga sabi ko nga, I have to speak up.

"I have to clear this up kasi she's not here to defend herself.

I NEVER WALKED OUT. Carmina repeatedly stressed that the milk product's commercial was a couple of years back: "Iba na nga yung endorser!"

Further exressing the absurdity of the intrigue, the actress pointed out, "If something like that really happened, dapat matagal na. Bakit ngayon lang nilabas?

A celebrity who has been in the industry for the most part of her life, Carmina added, "It's not my personality na mag-walk out.