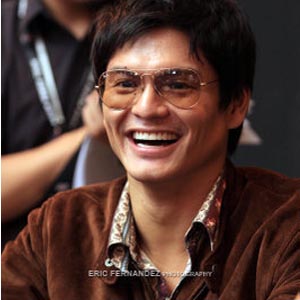 Al Galang is an alumnus of the University of California Los Angeles (UCLA). He went to Bikram's Yoga College of India, where he earned his certification as a Bikram Yoga teacher after studying for two years.

Despite recent statements from both Dra. Vicki and Hayden, one question remains unanswered: Did the letter really come from Al Galang?

PEP.ph (Philippine Entertainment Portal) found a way to get in touch—via Facebook—with the 28-year-old owner and director of Sundar Bikram Yoga in Greenhills, San Juan.

Our first query was about his involvement in the split of the famous beauty doctor and Hayden.

Al had only kind words to say about Dra. Vicki.

"Well, I think the world of Vicki; what an awesome gal. [She] and Cristalle are truly dear to me," he wrote.

Regarding the letter, he admitted to giving the famous cosmetic surgeon "notes and words of encouragement in the past."

But he couldn't remember which "particular letter" Hayden was referring to.

Lastly, he expressed his excitement about Dra. Vicki's "newfound happiness."

Following is Al's reply to our message:

"Hey Karen. Nice to hear from you. Well, I think the world of Vicki; what an awesome gal. [She] and Cristalle are truly dear to me.

"As for Vicki though, I'm excited for her; she really seems to enjoy being single. Her newfound happiness definitely suits her."