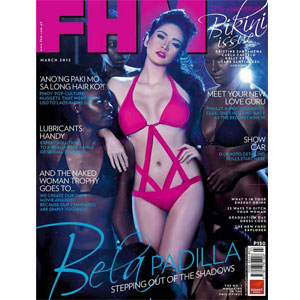 Bela Padilla tweeted, "The concept of my @FHMPhil cover was stepping out of MY inhibitions MY fears and MY shadows. Not belittling any race. :) "The title provided by @FHMPhil is in connection with the article and has NOTHING to do with skin colors." Were online viewers reading too much into the cove

FHM Philippines's March 2012 cover created quite a stir last weekend when its cover photo was uploaded on the magazine's Facebook page.

The photo showed Bela, who was clad in a sexy fuschia bikini, being surrounded by black female models.

The young Kapuso actress was quick to explain the cover's concept on her Twitter.

Yesterday, February 26, she tweeted, "I meant no harm with this cover. I'm so sorry to everyone who got offended. I hope all of you see the beauty of the cover and appreciate it"

She also explained the rationale behind the blurb:

"The concept of my @FHMPhil cover was stepping out of MY inhibitions MY fears and MY shadows. Not belittling any race. :)

"The title provided by @FHMPhil is in connection with the article and has NOTHING to do with skin colors.

"The girls on my cover Of @FHMPhil symbolize the different sides of ME that I have outgrown and am ready to step out of. Let's be open minded."

FHM CHANGES COVER PHOTO. The comments had the editorial of FHM giving the cover a second look.

In the end, they "decided to take the side of sensitivity," and are now changing the cover photo.

Here's the full statement of FHM Philippines released on February 27: