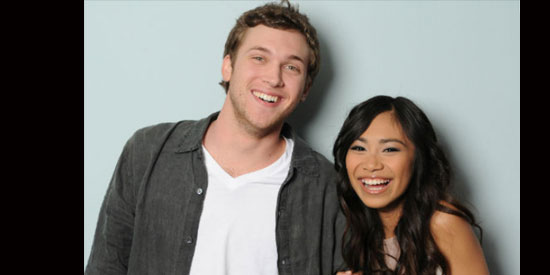 Phillip Phillips (left) was voted winner of American Idol Season 11, while Jessica Sanchez (right) settled for first runnerup. The Migrant Heritage Commission (MHC), a Washington DC-based non-profit organization that secures and promotes cultural diversity, sent a letter, dated May 25, 2012, to AI producer Nigel Lythgoe, "seeking an explanation as to how the judging of the winners are arrived at. How those 132,000,000 votes cast were reach

"Congratulations on the successful season of the American Idol which has become a globally supported spectacle on television entertainment. We likewise congratulate the winner Phillip Phillips for winning the title this year.

"Our Washington, D.C.-based organization, the Migrant Heritage Commission (MHC), a non-profit organization that secures and promotes cultural diversity, has been actively involved in the voting for Filipina-Mexican contestant Jessica Sanchez, who ranked Number 2 in the contest. It was a remarkable feat which Ms. Sanchez has reached.

"In the spirit of transparency and public trust, we are earnestly seeking an explanation as to how the judging of the winners are arrived at.

"We do not want to be misconstrued as sour grapers, because we were supportive of Jessica Sanchez, but because we deserve to know the entire process, including the information as to how a board of auditors (if there is) conducts the tallying of scores.

"We hope that this letter would merit your due attention. Thank you so much."