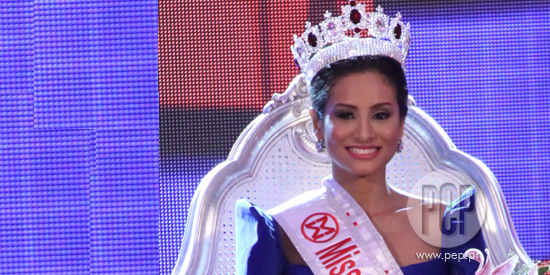 All hail the new queen! Twenty-three-year-old Queeneerich Rehman from Las Piñas City succeeds Gwendoline Ruais as the new Miss World Philippines. She will be representing the country in the Miss World 2012 pageant to be held in Dongsheng Fitness Center Stadium, Ordos, Inner Mongolia, China on August 18.

After a series of activities and competitions held throughout the past month, the Miss World Philippines 2012 beauty pageant finally came to a close on June 24 as the grand coronation night was held at the Tent City in Manila Hotel.

Among the 25 candidates who vied for the title, it was Queeneerich Rehman (Candidate No. 22) from Las Piñas City who took home the coveted crown.

She is followed by her entourage: First Princess Mary Anne Ross Misa (No. 13) from Parañaque City; Second Princess Vanessa Claudine Amman (No. 2) from Cebu; Third Princess April Love Jordan (No. 17) from Ilocos Sur; and Fourth Princess Brenna Cassandra Gamboa (No. 16) from Batangas.

Other candidates who completed the top 12 were Mariver Ocampo (No. 14) from Bulacan, Rufaida Babudin (No. 18) from Palawan, Carla Jenina Lizardo (No. 5) from Pasig City, Marie Loraine de Guzman (No. 19) from Manila, Kay Wigand (No. 1) from Mindoro, Vania Valiry Vispo Vispo (No. 11) from Pasig City, and Paulina Eliseeff (No. 12) from Quezon City.

The Best in Long Gown, Miss Oracare, and Miss Manila Hotel awards were given to April Love Jordan.

The program, which had a delayed telecast on TV5, was hosted by Edu Manzano and 1993 Miss World second princess Ruffa Gutierrez.

On August 18, Queeneerich Rehamn will represent the Phlippines in the Miss World 2012 beauty pageant to be held at the Dongsheng Fitness Center Stadium, Ordos, Inner Mongolia, China.