PEP EXCLUSIVE: Piolo Pascual on Angelica Panganiban: “She brings out the funny side of me.” 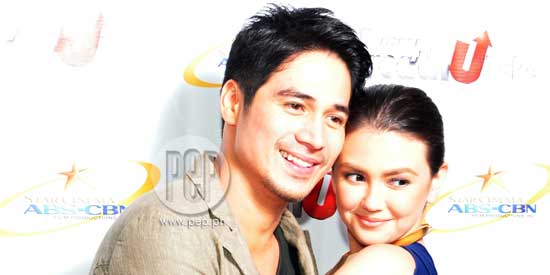 “Feeling ko ‘pag siya yung kasama ko, lumalabas yung pagka-kulit ko. And I like it because I feel like a kid when I’m around her.” Shortly after shooting the romantic-comedy flick Every Breath You Take, Piolo is happy to be working again with the award-winning comedy actress Angelica Panganiban. The two Kapamilya actors star in the forthcoming soap, Apoy sa Dagat.

Piolo Pascual is content with the 16-week run of Dahil Sa Pag-ibig, his last teleserye, which he topbilled with Jericho Rosales, Cristine Reyes, and Maricar Reyes. The primetime soap which started airing on March 12 and ended on June 29 this year did not see an extended airing time.

“It was really meant for it,” Piolo initially explained in an exclusive interview with PEP.ph (Philippine Entertainment Portal) last night, July 7, at an ASAP rehearsal at Studio 10, ELJ Building, ABS-CBN network, Quezon City.

“Honestly, I wanted it to end right away because we didn't want it to drag. The concept of the story is really going to run for a certain period of time.

Piolo thought it was best that the soap “ended on a high note.”

APOY SA DAGAT. Piolo is busy yet again with an upcoming teleserye which he began working on early this month. A romantic-drama, Apoy sa Dagat stars the 35-year-old heartthrob with Angelica Panganiban, Diether Ocampo, and Angel Aquino. It will be directed by Eric Reyes who was also behind the primetime soaps Lobo and Maging Sino Ka Man.

Apoy sa Dagat is another love story, but according to Piolo, the soap has a “water” element to it.

“Just the same, ABS[-CBN] always comes up with fresh ideas…

ANGELICA PANGANIBAN. It was only in May this year that Piolo and Angelica’s romantic-comedy, Every Breath You Take, hit the cinemas nationwide. As their on-screen romantic pairing leaps to Apoy sa Dagat, Piolo, by now has grown comfortable around the sexy actress.

“We worked for one year for Every Breath You Take and this time around, after Mangarap Ka, I think, para kaming nag-full circle kasi she was 17 [years old] then when we did Mangarap Ka.”

Piolo and Angelica acted alongside each other in the 2004 soap, Mangarap Ka.

“We’re doing another show after almost ten years,” he said.

“We’re both excited because so many things have changed. We both matured as artists, as performers. I know marami pa kaming puwede ibigay.”

Asked what's the best thing about working with Angelica, Piolo quipped, “She’s a natural. She brings out the funny side of me.

“Sabi niya, nakakatawa pala ako. Sabi ko, I’m only like that when I’m with you.