PEP EXCLUSIVE: GMA-7 did not renew Claudine Barretto's contract; TV5 has no long-term plans for the actress 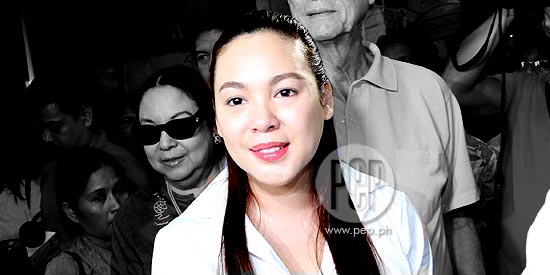 After the two-year exclusive contract of Claudine Barretto with GMA-7 ended in November 2011, this was no longer renewed by the Kapuso network. Recently, Claudine taped for one episode of the TV5 drama anthology Untold Stories. But a Kapatid network executive tells PEP that they have no "long-term plans" for the former Kapuso star.

GMA-7 did not renew the contract of Claudine Barretto.

This was confirmed by CEO and Chairman Atty. Felipe Gozon in an exclusive interview with PEP.ph (Philippine Entertainment Portal) earlier this afternoon, August 22.

The 33-year-old Claudine, who rose to star status as an ABS-CBN talent, signed an exclusive two-year contract with GMA-7 in November 2009.

“It was not renewed,” Atty. Gozon said simply.

Did their decision have anything to do with the NAIA brawl that involved Claudine, her husband Raymart Santiago, and columnist-host Ramon "Mon" Tulfo?

Their decision had nothing to do with this controversy, according to the CEO and chairman of GMA Network.

It will be recalled that last May 6, Claudine and her husband, Raymart, a GMA talent, were involved in a brawl inside the Ninoy Aquino International Airport.

The commotion started when Raymart saw Mon using a cellphone to take a shot of Claudine, who was then berating a ground stewardess about her missing luggage.

The commotion ended in a very physical confrontation caught on some passengers' own cellphones and released on the web. The footage, which went viral, showed the Santiagos and their companions hitting and kicking Tulfo, who at one point found himself sprawled on the floor, with Claudine on top of him and pummeling him with her fists.

Both parties have since filed cases against each other. These are currently ongoing in court.

Earlier today, by text messaging, PEP sked Perci Intalan, TV5’s head of creative and entertainment production, if they have plans to sign up Claudine.

“Claudine just taped one episode of Untold Stories. Beyond that, we have no long term plans.”

Prior to her two-year stay with GMA-7, Claudine’s career was managed for 17 years by Star Magic, the talent-management arm of ABS-CBN.

When she moved to the Kapuso Network, she was not only given a guaranteed contract, which means that she would get paid her full contract price even during the periods when she was not working on any network show, her price per taping day was also increased by at least P100,000 above her Kapamilya price.

Her well-known acting skills were then showcased in a drama anthology that carried her name. She was also made to appear in the Kapuso shows Jillian: Namamasko Po, as well as Spooky Nights Presents: Nuno sa Feng Shui.

Then GMA Films made her one of the three lead stars in the movie In Your Eyes, a romantic drama that GMA Films produced with Viva Films. The other two leads were GMA's prized talent Richard Gutierrez and today's "It Girl" Anne Curtis.

Claudine’s last regular show for GMA-7 was the telefantasya Iglot, which aired from August 29 to November 11, 2011. She topbilled this show with former ABS-CBN colleagues Marvin Agustin and Jolina Magdangal.

Claudine's last appearance as a Kapuso was via a guest role in the primetime series Biritera.

RIFT WITH ABS-CBN. The July 2012 issue of YES! Magazine showed that the rift between Claudine and Johnny "Mr. M" Manahan, chairman emeritus of Star Magic, has never fully healed.

That rift burst in 2010, when Claudine, who was then with GMA-7, accused Angelica Panganiban, an ABS-CBN talent, of spreading rumors that Claudine was having an affair with Derek Ramsay's best friend. Angelica and Derek were an item then.

Angelica completely denied Claudine's charge, but this did not stop Claudine from using the social networking site Twitter to load up her accusations against Angelica. This angered Mr. M, who is considered the father and protector of ABS-CBN talents.

YES! quoted Star Magic head Mariole Alberto as saying that Claudine called Mr. M on his birthday last February 11, but that the latter would not speak to Claudine.

This was seen by insiders as a big blow to Claudine, whose career was engineered by Mr. M throughout the 17 years she spent with Star Magic. This is the man she called "Tito Johnny" and whom she often called her "second father."

When asked if Claudine had tried to return to ABS-CBN, however, Ms. Alberto "waved the question away" and said: “The point is, it’s better that you let them go and they choose to stay.”

During the 20th anniversary celebration of Star Magic, which was aired last July 8 on ASAP 2012, Claudine gave a taped message expressing her love and gratitude for the talent management group.

“Star Magic saw me grow up on kiddie TV, as a teenybopper, as a young adult in Buttercup, saw me swim as a mermaid sa Marina, and saw me cry buckets of tears sa lahat ng mga teleserye ko.

"My seat might have left your door, but my heart's forever and will always be with you,” Claudine said.

The actress added, “Thank you so much, Star Magic, for all of this. I will forever be grateful. May your magic continue.